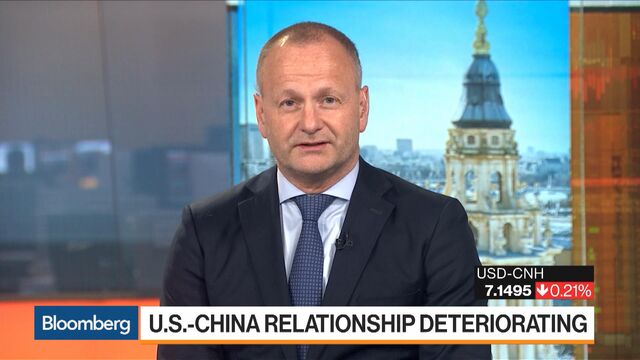 Fed Has Every Excuse to Cut Rates, ING's Garvey Says

U.S. stocks advanced on optimism that the U.S. and China will make progress in trade talks this week despite some conflicting signals on the outlook. Treasury yields climbed.

The S&P 500 Index ended the day up almost 1% in a rally fueled by speculation that China is still open to a partial deal with the U.S. But in a sign of how tenuous the new-found confidence is, stocks pared gains in the afternoon after a report that China sought to tamp down expectations for progress.

Ten-year Treasury yields climbed past 1.55%. The Turkish currency and its stocks dropped after the country began a military offensive in Syria against Kurdish militants. The Stoxx Europe 600 Index advanced for the third day in four.

While volume was subdued during the Yom Kippur holiday, equities traders were looking closely for signals about high-level U.S.-China trade talks that are set to resume in Washington on Thursday. While a broad agreement seems unlikely, China indicated it’s open to a limited deal, provided no more tariffs are imposed, according to an official. In return, Beijing would offer non-core concessions like purchases of agricultural products without giving in on major sticking points, the official said, without offering further details.

“It’s encouraging to hear China say that they want to make some sort of small deal,” said Randy Frederick, a vice president of trading and derivatives who helps oversee $3.7 trillion in assets at Charles Schwab. “If we can get the two sides to agree to not raise tariffs any further than where they are, that would be positive.”

Investors are also looking to gauge the next moves by major central banks. Traders of fed funds futures broadly maintained the amount of easing they expect from the Federal Reserve this year after Wednesday’s release of minutes from the latest meeting. They showed officials began debating how far their current interest-rate cutting campaign should extend even as they agreed to lower rates in response to growing risks to the U.S. economy.

Elsewhere, the iShares MSCI Turkey ETF posted its worst three-day performance since March as the lira weakened to a four-month low. Benchmark equity gauges fell across Asia, except for those in Shanghai and Mumbai. Bond yields dropped in Greece after the region’s most-indebted country sold bills at negative yields. Gold held above $1,500 an ounce.

The yuan climbed offshore for its biggest gain in almost a month, helped by trade optimism and a stronger-than-expected daily fixing. West Texas crude touched $53 a barrel before paring its advance.

Here are some key events coming up this week:

Here are the main moves in markets:

— With assistance by Cormac Mullen, and Adam Haigh