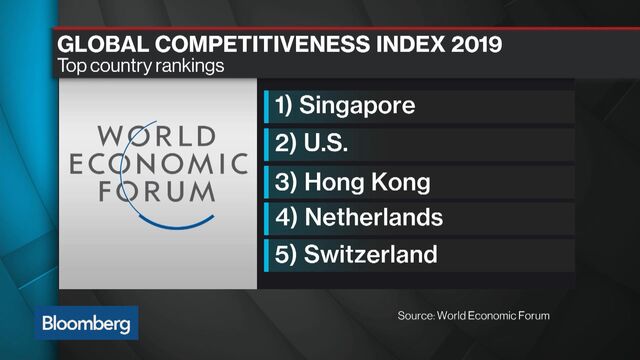 Explore what’s moving the global economy in the new season of the Stephanomics podcast. Subscribe via Pocket Cast or iTunes.

The U.S. dropped from the top spot in the World Economic Forum’s annual competitiveness report, losing out to Singapore.

Hong Kong, the Netherlands and Switzerland made up the rest of the top five, according to the WEF survey published on Wednesday. On the U.S., it noted growing uncertainty among business leaders and said trade openness has declined.

The forum focused its report on continued low productivity growth a decade after the financial crisis, calling this the $10 trillion question -- the amount injected by the world’s four major central banks through 2017. In line with others, its view is that while monetary stimulus helped pull the global economy out of recession, it wasn’t the solution for all problems.

With a new slowdown emerging, the WEF said fiscal policy has been underused. It joined the chorus calling for more government support, particularly in investment to boost productivity.

The WEF also said central banks must take some blame for weak productivity, as their trillions of stimulus keep zombie firms alive, sometimes crowding out stronger businesses. Given monetary policy resources are so depleted, it said investment-led stimulus would be an “appropriate action to restart growth in stagnating advanced economies.”

“Although loose monetary policy mitigated the negative effects of the global financial crisis, it may also have contributed to reducing productivity growth by encouraging capital mis-allocation.... As monetary policies begin to run out of steam, it is crucial for economies to rely on fiscal policy and public incentives.”
-WEF Global Competitiveness Report 2019

While the U.S. drops down to second in the survey of 141 countries, the WEF said it remains an “innovation powerhouse,” ranking first in business dynamism and second on innovation capability. Also in the top 10 were Japan, Germany, Sweden, the U.K. and Denmark. Canada and France were ranked 14th and 15th respectively, while China was in 28th place.