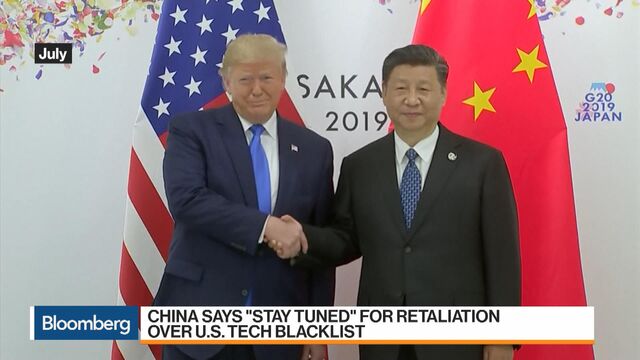 Terms of Trade is a daily newsletter that untangles a world embroiled in trade wars. Sign up here.

China is still open to reaching a partial trade deal with the U.S., an official with direct knowledge of the talks said, signaling that Beijing is focused on limiting the damage to the world’s second-largest economy.

Negotiators heading to Washington for talks starting Thursday aren’t optimistic about securing a broad agreement that would end the trade war between the two nations, said the official, who asked not to be named as the discussions are private.

But China would accept a limited deal -- like those it has sought since 2017 -- as long as no more tariffs are imposed by President Donald Trump, including two rounds of higher duties set to take effect this month and in December, the official said. In return, Beijing would offer non-core concessions like purchases of agricultural products without giving in on major sticking points, the official said, without offering further details.

In the past, China offered government purchases of American commodities and other short-term gestures aimed at appeasing Trump, only to be rebuffed and pushed with tariffs into pursuing a broader agreement. Heading into these talks, it’s unclear whether the the U.S. president is under enough domestic pressure with a weakening economy and an impeachment probe to settle for an incremental win this time around.

Stocks rose in the U.S. and Europe as the news revived hopes of progress in trade talks. Treasuries slipped. Separately, the Financial Times reported that China is offering to increase purchases of American soybeans to 30 million tons annually from 20 million presently, citing people briefed on the talks. That would be around the level China was purchasing before the trade war started.

Vice Premier Liu He arrived in Washington on Tuesday and lower-level staff from both countries have been meeting since Monday to prepare for the negotiations Thursday and Friday, according to people familiar with the matter.

The latest round of trade talks come just days after the White House announced the blacklisting of Chinese technology firms over their alleged role in oppression in the far west region of Xinjiang, as well as visa bans on officials linked to the mass detention of Muslims. At the same time a fight over free speech between China and the National Basketball Association, triggered by a tweet backing Hong Kong’s protesters, showed the widening gap between the countries.

“There might be big breakthrough in the coming trade talks as both sides have expressed good gestures and positive signals,” said Huo Jianguo, a former Chinese commerce ministry official who is now vice chairman of the China Society For World Trade Organization Studies. “The recent blacklist and sanctions from the U.S. is just another usual tactic to showcase that it has multiple tools in the trade negotiations in line with Trump’s maximum pressure policy. It is hardly surprising to us and we shouldn’t take it too seriously.”

Bloomberg News reported last month that the Trump administration has discussed offering a limited deal that would delay or even roll back some U.S. tariffs for the first time in exchange for Chinese commitments on intellectual property and agricultural purchases. Questions about the strength of the U.S. economy have lingered before Trump faces an election next year.

President Xi Jinping’s government is under pressure to stem the broadening conflict as the trade war adds to the downward forces on China’s slowing economy. At the same time, China has resisted changes to its own industrial and economic policies that could potentially weaken the Communist Party’s grip on the economy.

The trade talks have failed to make serious headway since negotiations collapsed in early May. Since then, China has ramped up its nationalist rhetoric as the U.S. has targeted national champions like Huawei Technologies Co.

The reaction of the Chinese state this week after an NBA team manager tweeted support of protesters in Hong Kong is a case in point, with broadcasters refusing to broadcast games watched by millions. China also vowed to retaliate after the U.S. took action against companies and officials it said were involved in oppressing Muslims in Xinjiang.

“The rising nationalism sentiment at home is creating hurdles for President Xi to make concessions in the upcoming trade talks with the U.S. in light of the NBA firestorm and Xinjiang sanctions,” said Suisheng Zhao, executive director of the Center for China-U.S. Cooperation at the University of Denver’s Graduate School of International Studies. “Even if China is willing to make some compromise, that space is limited.”

(Updates with Chinese delegation in seventh paragraph.)
Published on
Updated on
Have a confidential tip for our reporters?
GET IN TOUCH
Before it's here, it's on the Bloomberg Terminal.
LEARN MORE