By
Edvard Pettersson
Updated on 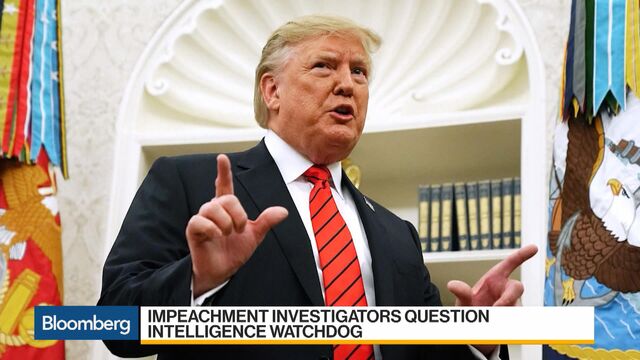 Second Whistle-Blower May Be Poised to Emerge in Trump Saga

Here are the latest developments:

Lawyers for the House Judiciary Committee raised concerns about redactions in the FBI reports of interviews that were part of Special Counsel Robert Mueller’s Russia investigation.

The committee didn’t find out until a court hearing on Tuesday that portions of the reports that the Justice Department has already provided were redacted for either “executive branch confidentiality interests” or “presidential communications,” according to a filing Wednesday in federal court in Washington.

The Justice Department so far has not provided a line-by-line explanation for each redaction in the reports, the House lawyers said. Instead, portions of the reports are “simply blacked out without any explanation,” they said. They expect to challenge certain redactions once they know what the reasons behind them are, according to the filing.

Vice President Mike Pence said he’d have “no objection” to releasing transcripts of his calls with Ukrainian officials.

“I’d have no objection to that and we’re discussing that with the White House counsel as we speak,” Pence told reporters Wednesday in Iowa when asked whether he’d release the records.

A Fox News poll shows that 51% of voters want Trump impeached and removed from office, up from 42% in July.

The whistle-blower “has never worked for or advised a political candidate, campaign, or party,” the person’s lawyer, Mark Zaid, said on Twitter.

Hours earlier, Trump tweeted that the whistle-blower is a “big Democrat“ with ties to one of the president’s Democratic opponents. Michael Atkinson, the inspector general for the intelligence community, acknowledged the whistle-blower has “arguable political bias” in favor of a rival candidate in an Aug. 26 report.

Zaid said the whistle-blower’s entire government career was spent in apolitical, civil servant positions in the executive branch. In that role, the whistle-blower came into contact with presidential candidates “from both parties in their roles as elected officials -- not as candidates,” the lawyer tweeted.

Other sources have confirmed “virtually every substantive allegation” by the whistle-blower, Zaid said. -- Laurie Asseo

Republican Lindsey Graham, chairman of the Senate Judiciary Committee, said it would be an “abuse of power” if House Democrats refuse to release a transcript of closed-door testimony by Kurt Volker, the former special envoy to Ukraine.

“If this continues, I will call Volker before the Senate Judiciary Committee to testify publicly to ensure the full story is told,” Graham said on Twitter.

Joe Biden said for the first time Wednesday that Trump should be impeached. He made the declaration in a speech in Rochester, New Hampshire.

Biden had yet to explicitly call for Trump’s impeachment, saying Congress would have no choice but to impeach if the Trump administration refused to cooperate with a probe into his behavior. -- Tyler Pager

Fox News said Trey Gowdy will no longer contribute to its television programs after the former South Carolina representative agreed to help Trump fight his impeachment.

“Trey Gowdy has been terminated and is no longer a contributor,” the network said in an email.

Gowdy will be acting as outside counsel for Trump in the impeachment battle, working with the president’s personal lawyer Jay Sekulow, according to a person familiar with the matter. -- Jennifer Jacobs

Marie Yovanovitch, who was recalled by Trump as U.S. ambassador to Ukraine, isn’t expected to appear voluntarily on Friday, as scheduled, for closed-door testimony before House committees leading the impeachment investigation, said a House official.

White House Counsel Pat Cipollone notified the House on Tuesday that the president and his administration won’t cooperate with the inquiry, which Cipollone declared unconstitutional and invalid.

The Democrats heading those committees have decided that -- given the White House position -- a subpoena to Yovanovitch would do more to protect her legal options than if she defied the administration and appeared voluntarily. -- Billy House

Trump attacked the unnamed whistle-blower whose complaint is a part of the House impeachment inquiry as having a “conflict of interest.”

Trump, in a Wednesday morning tweet, seized on a claim being made in conservative media that the whistle-blower had “involvement with a Democratic Candidate” and called for the unidentified U.S. intelligence community employee to be “exposed and questioned properly.”

The Whistleblower’s facts have been so incorrect about my “no pressure” conversation with the Ukrainian President, and now the conflict of interest and involvement with a Democrat Candidate, that he or she should be exposed and questioned properly. This is no Whistleblower.....

“The Whistleblower’s lawyer is a big Democrat. The Whistleblower has ties to one of my DEMOCRAT OPPONENTS. Why does the ICIG allow this scam to continue?” the president said in another tweet.

Michael Atkinson, the inspector general for the intelligence community, acknowledged the whistle-blower has “arguable political bias” in favor of a rival candidate in an Aug. 26 report but said it did not undermine the credibility of his complaint. The whistle-blower’s complaint “appears credible,” Atkinson said in the report.

Portions of the whistle-blower’s complaints have already been substantiated by the White House release of a summary of a July 25 phone call in which Trump urged Ukrainian President Volodymyr Zelenskiy to investigate former Vice President Joe Biden, now a 2020 political opponent. -- Jennifer A. Dlouhy

— With assistance by Jennifer A Dlouhy, Billy House, Jennifer Jacobs, and Tyler Pager