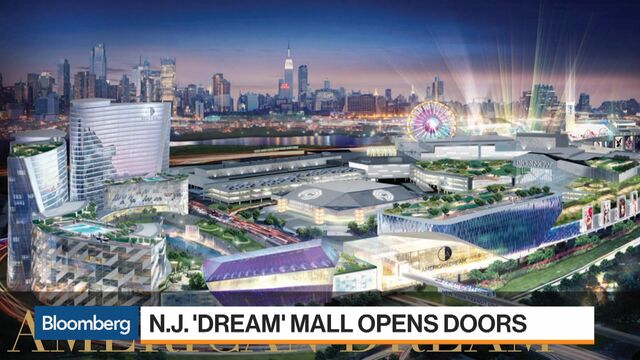 There are certain things one might expect to do in the Meadowlands of New Jersey, but skiing hasn’t been one of them, at least not until last week. The area, primarily known for football games and as the final resting place for more than a few Sopranos characters, is now home to North America’s first indoor ski slope.

Big Snow, as it’s known, rises 16 stories at an angle from the surrounding marshland, like a massive cruise ship run aground. It’s a strange sight from the outside and even more surreal within, as skiers and snowboarders descend a 1,000-foot-long, 200-foot-wide expanse of snow. It’s kept at a chilly 28F year-round and serviced by a chairlift that ascends to the rafters, all within sight of the Manhattan skyline.

The slope is one of the anchor attractions in the American Dream mega mall. (Straightforward naming seems to be part of the strategy.) For a decade and a half, drivers on the Jersey Turnpike have witnessed the retail and entertainment mecca take shape in very slow increments. Initially conceived in 1996, it didn’t break ground until 2004, then targeting a 2007 opening. Delays, funding issues, and changes of ownership would push the total cost above $5 billion.

Triple Five Group, the company behind Minnesota’s Mall of America, anticipates drawing 40 million visitors annually to the 3-million-square-foot space, set to be fully operational by March 2020. It is projected to include 450 stores and restaurants and 15 entertainment options, including a DreamWorks Water Park, a Nickelodeon Universe, a Legoland Discovery Center, a regulation ice rink, and an aquarium.

The ski slope, however, opened on Dec. 5. By 11 a.m. on opening day, an enthusiastic crowd of friends and families were geared up for a VIP ski session that included professional athletes such as Lindsey Vonn, as well as representatives from Head Skis and Burton Snowboards, the primary gear suppliers for Big Snow. A DJ hyped up the crowd as they awaited the inaugural runs. “We’re about to kick off the endless winter,” he said, cuing up the song This is How We Do It just as Vonn reached the top of the chairlift. “This is how we do it in New Jersey!”

After Vonn’s first run, filmed by seemingly every news crew in the tri-state area, she rendered her verdict. “It was actually really good—I mean, I’ve never skied indoors before, so I don’t have a reference, but it was great,” she said. She noted with a grin that it was her first run since she had her latest knee surgery in the spring. “Sometimes you hear about indoor snow being a little grainy, but it was actually nice, light, and fluffy.”

Asked if she’d be back, she gestured towards the faux ski lodge facades lining the bottom of the slope and said, “I’m excited for this lodge to open, maybe do some après ski.” Plywood still covers parts of the façade, but those half-finished spaces will soon be populated with a Yard House Brewery location, a Lucky Strike bowling alley, and even a Hard Rock Café, all with windows looking onto the ski hill.

There are more than 30 indoor ski hills around the world, but this is the first in North America. The idea has tended to flourish in places at a far remove from mountains and snow, or that are space-constrained—Ski Dubai, at the Mall of the Emirates, is an often-cited comparison. “I remember walking in for the first time into this big, empty facility and thinking it was fantastic, just so big,” says Joe Hession, chief executive officer of Snow Operating, which took over the project four years ago. (The company also owns and operates the Mountain Creek ski area in northern New Jersey—a normal, outdoor mountain with a vertical drop of 1,000 feet, six and a half times Big Snow’s.) “I remember thinking, ‘Wow that’s going to take a lot of snow,’” he continues. “So that’s what we’ve been doing for the past two months—making snow.”

What they’ve created is a reasonable approximation of a ski slope. At its steepest point at the top, the slope has a 26% grade, which is comparable to a solid intermediate run at any ski resort. Granted, it doesn’t last long, but it feels real. The 200-foot-wide slope mellows as it drops 160 feet over the course of the 1,000-foot-long run, depositing skiers back at the lift.

A lower-angled beginner’s area is off to one side, and a small terrain park is on the other, plus a booth serves hot chocolate in the corner. The snow covers the full 180,000 square feet to a minimum depth of three feet. Hession says it will always be the same quality, thanks to an environment that is completely controlled, free of wind and sun, and a constant 28 degrees. Unlike other ski resorts, it will not close for summer.

A hard cap of 500 skiers at any one time has been instituted; users sign up for specific time slots, allowing them to use what Hession describes a “push-pull” system. “Basically, every 15 minutes, 60 people come in, and 60 people are leaving,” he says. “The main thing was, we didn’t want people to feel rushed. I want you to get settled, put your stuff away, get the attention you need with your equipment, and then get on the snow, and your two hours starts.”

That afternoon, I worked my way through a seamless rental process. On arrival, we walk through a retail shop and sign in via tablets to purchase a two-hour package that starts at $50. The price includes nearly everything one might want: all ski and snowboard gear; ski pants, jacket, and helmet; a lesson, if needed; and, of course, unlimited lift access. A wristband is loaded with all my information and we proceed through a line that snakes through various gear-fitting stations, from jackets and pants to boots to skis, and then out the door to the lift.

I put on my Big Snow pants, clicked my new rental boots into my pristine rental skis, and ticked off a dozen descents. Each run down, even making more turns than necessary, lasted perhaps 30 seconds. The deliberately slow quad chair—an anti-crowding measure by the Snow Operating team—meant that the lift took three and a half minutes to crawl back to the top. That doesn’t sound like much, and it’s certainly not where I imagined I’d be getting my first runs of this ski season, but I soon noticed that everyone I was riding the chairlift with was smiling, marveling at what had been created in this cavernous space, staring up at the icicles dripping from the rafters.

On the hill, the crowd’s skill level was mixed, though tilted toward the more experienced end of the spectrum. Older guys in jeans carved tight turns, young snowboarders launched off jumps in the terrain park, and guys in the finance uniform—fleece vest over button-down—did laps. Snowboarders interested in the rails, jumps, and other features of the terrain park seemed particularly excited.

But the Snow Operating team estimates that, of the expected 600,000 skiers this year, about 200,000 of them will be beginners, the richest target market for Big Snow’s offerings. “This is a tremendous opportunity for winter sports in general, because of the population base around here,” says Jon Rucker, president of Head Skis USA, who attended the opening and was on one of the first chairs up. “Exposing these great sports to different populations is radically important for the future of our business.”

Most of the intermediate-level skiers I talked to were enthusiastic. “I love it, it’s definitely unique, and it’s got a little bit of everything,” said Dumar Casbrillon, a housepainter who took the afternoon off to come snowboarding. “The best part is that it’s five minutes from my house.” And if Casbrillon represents one important demographic—local enthusiasts—his girlfriend, watching and taking photos at the bottom, represents another. She is a novice, often intimidated by bigger hills. But by the end of the day, she told him she would take a lesson the next time they come.