By
Julie Johnsson
Updated on 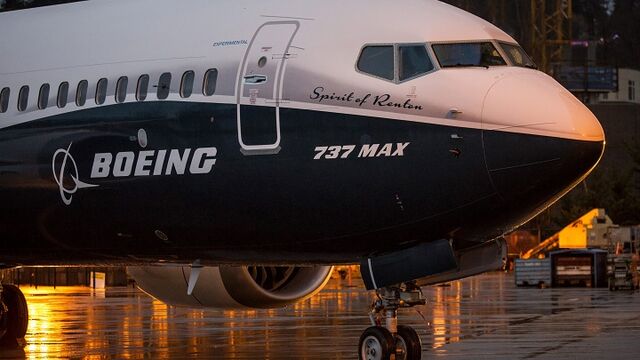 WATCH: Is Boeing considering temporarily halting production of the 737 Max?

Boeing Co. dropped the most in nearly two months on news that the company is weighing a temporary production halt for the grounded 737 Max.

With regulatory approval for the jet’s return increasingly likely to slip beyond January, Boeing’s board is considering whether to slow already-pared output of its best-selling jet, a person familiar with the matter said. Some executives are convinced, however, that a full pause instead would be less disruptive, said the person, who asked not to be identified as the discussions were confidential.

A decision could come as soon as Monday as directors review manufacturing plans for the 737 program, the company’s biggest source of cash, as part of a regularly scheduled December board meeting. The board typically sets the company’s dividend for the coming year at such sessions and decides on its share repurchases, which have been suspended amid the crisis prompted by the unprecedented grounding.

Boeing dropped 2.9% to $331.89 at 9:40 a.m. in New York after tumbling 4.5%, the most intraday since Oct. 21. Through last week, Boeing had declined 19% since a March crash in Ethiopia sparked a global grounding of the Max, the biggest drop on the Dow Jones Industrial Average.

The Wall Street Journal reported earlier that the production plans have become more urgent as the U.S. Federal Aviation Administration signaled it wouldn’t certify the revamped Max this year.

“We continue to work closely with the FAA and global regulators towards certification and the safe return to service of the Max,” Boeing said in an email. “We will continue to assess production decisions based on the timing and conditions of return to service, which will be based on regulatory approvals and may vary by jurisdiction.”

The Chicago-based planemaker has drafted contingency plans for a variety of scenarios as the Max’s global grounding stretches to more than nine months following two fatal crashes that killed 346 people.

Boeing slashed 737 production by 19% in the weeks following the March tragedy. Meanwhile, inventory costs have ballooned to record levels as the company’s factory in Renton, Washington, continued to churn out 42 of the jets a month.

Since the company isn’t allowed to deliver the aircraft while the flying ban remains in place, Boeing has placed more than 380 newly built planes in storage, according to a tally by 737 production blogger Chris Edwards. The build-up would continue if production were slowed rather than halted.

“They are doing the sensible thing by halting or putting a pause on the production line,” said Shukor Yusof, founder of aviation consulting firm Endau Analytics. “Cash burn has been bad.”

Boeing’s board is meeting after a bruising week for the aerospace giant. In a sign of growing rancor between the company and its regulator, FAA Administrator Steve Dickson chastised Boeing Chief Executive Officer Dennis Muilenburg in a Dec. 12 meeting for pursuing an unrealistic schedule for the Max’s return to service.

The FAA said it was worried by a perception that Boeing was pressuring regulators to take action. In a message to the U.S. Congress, the FAA said it had used the meeting to exhort the company to focus on the “quality and timeliness of data submittals for FAA review.”

The rare public admonishment came a day after Dickson was grilled for hours by the House Transportation & Infrastructure Committee over the FAA’s decision to allow the 737 Max to continue flying after the initial fatal Max crash off the coast of Indonesia on Oct. 29, 2018.

With the FAA having signaled that the Max wouldn’t be cleared to fly until next year, American Airlines Group Inc. further delayed a return of the planes to its schedule until early April. Southwest Airlines Co., the largest operator of the single-aisle plane, said it was considering a similar move.

The Max was grounded after the second crash, of an Ethiopian Airlines flight, on March 10. The disasters prompted the longest flying ban for a U.S. airliner in the jet age.

The production decision isn’t easy for Boeing amid the tightest job market in a half century.

The largest U.S. industrial company by market value wants to avoid a potential unraveling of manufacturing expertise across a broad swath of North America as it recovers from the Max crisis. That’s the risk if large numbers of highly skilled workers from the 600 mostly U.S. companies building components for the jet were to move on to other jobs at a time of historically low unemployment.

The company has been studying whether to pause Max manufacturing for a short, clearly defined period of time, Bloomberg reported in August. Executives figure that that approach would conserve cash and be less likely to trigger widespread layoffs than imposing another factory slowdown.

Boeing officials won’t discuss the finer points of how they would manage through a shutdown, including details like worker pay. But the idea is that coveted employees would prefer the certainty of a surgical shutdown to an open-ended period of slower production that could lead to layoffs.

The 400,000 parts that go into each Max arrive in a tightly choreographed sequence timed, in some cases, down to the hour. But suppliers do regularly navigate stoppages telegraphed in advance, such as strikes, and Boeing’s traditional year-end factory closing -- which could be extended this year into the longer pause.

— With assistance by Jeff Kearns, and Kyunghee Park

(Updates with market open in fourth paragraph)
Published on
Updated on
Have a confidential tip for our reporters?
GET IN TOUCH
Before it's here, it's on the Bloomberg Terminal.
LEARN MORE