By
Justin Sink
and
Billy House
Updated on

By
Justin Sink
and
Billy House
, 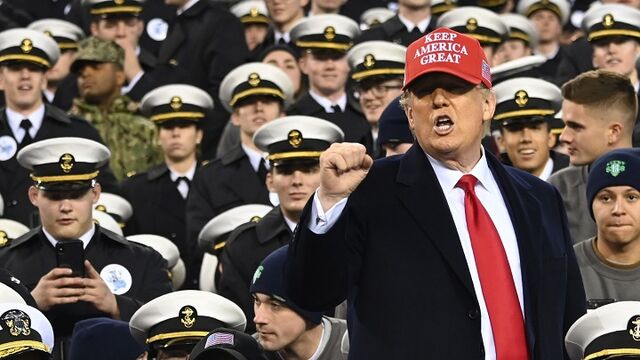 WATCH: Trump’s likely impeachment this week is already casting a cloud over the 2020 election.

Donald Trump’s likely impeachment this week adds a permanent stain to a presidency plagued by unrelenting turmoil and partisan rancor, while aggravating U.S. political divisions as he starts his fight for re-election.

The House is all but certain to deliver the formal rebuke in a vote on Wednesday, marking the political climax of three years of Democratic furor over Trump’s time in the White House and the end of a frenetic three-month investigation into whether he abused the power of his office.

The fight is already casting a cloud over the 2020 election, with fresh fault lines emerging between parties on fundamental questions that strike at the legitimacy of American elections, interference from foreign governments and the limits of presidential powers.

House Judiciary Committee Democrats on Monday released a report on their investigation that said Trump “has demonstrated that he will remain a threat to national security and the Constitution if allowed to remain in office.”

The Judiciary Committee “does not lightly conclude that President Trump acted with corrupt motives,” the report said, calling that conclusion “inescapable.”

The drama is unfolding amid a confluence of other major political developments that would dominate headlines in an ordinary December. The House is set to approve an overhaul of Nafta, giving the president perhaps his biggest legislative win after the tax code overhaul he secured in his first year.

At the same time, the administration is trying to work out details of the first phase of a trade deal with China that has rattled financial markets for a year, and lawmakers are finishing a spending agreement to avert what would be the third government shutdown of Trump’s presidency.

“Do we have a constitutional democracy, or do we have a monarchy where the president is unaccountable? That’s what’s at stake here,” Judiciary Committee Chairman Jerrold Nadler said Sunday on ABC.

The vote in the House has appeared to be a fait accompli from the moment that Speaker Nancy Pelosi, who long cautioned against impeachment proceedings, backed liberal members of her caucus and announced her decision to open the investigation. At the same time, the trial that would follow in the Republican-controlled Senate appears equally preordained to acquit Trump, keeping him in office.

But the initial hesitation by Pelosi, a longtime Washington hand acutely aware of her base’s deep-seated anger with Trump’s blunt-force presidency, betrays the uncertainty surrounding the ramifications of this week’s vote.

In the immediate term, the House’s move ratchets up pressure on the White House to determine how best to soften the impact on the president’s political fortunes. Republican leaders in the Senate have indicated they’d like to quickly dispense with the impeachment trial, voting to acquit the president in the early weeks of the new year.

But the president has signaled he favors a trial that would allow Republicans to call Democrats like former Vice President Joe Biden and his son, Hunter, whose work at a Ukrainian energy firm was central to Trump’s efforts to pressure Kyiv to investigate his political rival. Such a forum would allow Trump to settle some scores and likely inflict damage on a possible general election opponent.

“I’ll do whatever they want to do, it doesn’t matter,” Trump told reporters at the White House on Friday, referring to Senate Majority Leader Mitch McConnell and other leading Republican senators. “I wouldn’t mind a long process, because I’d like to see the whistle-blower, who’s a fraud.”

McConnell’s more cautious approach would likely spare a possible surprise from current or former White House officials who so far have refused -- at Trump’s direction -- to participate in the impeachment proceedings. And even while Trump has earned plaudits from other Republicans so far, further extending a controversy that prompts fundamental questions about presidential abuse of power risks hardening perceptions that he’s mishandling his job.

QuickTake: Here’s the Story on Trump, Ukraine and Impeachment

Still, it could prove demoralizing to a Republican base that has been galvanized by an impeachment process they view as an undemocratic sham. The president has made his frustration with the effort a central theme of his political rallies and has been tweeting at a furious clip, sometimes more than 100 posts per day. A quick trial may fail to capture what White House officials describe as growing and consolidating anger within the Republican base.

The pressure may be equally acute on the Democratic side, where leaders are betting that the impeachment process won’t backfire to hurt them politically.

Senate Democratic leader Chuck Schumer on Sunday sent McConnell a letter proposing a process for a likely trial and seeking documents and testimony from administration officials, such as acting Chief of Staff Mick Mulvaney and former National Security Adviser John Bolton, who were asked to testify by the House but didn’t appear. Schumer said the structure is similar to the 1999 trial of Bill Clinton.

Polls suggest the House effort hasn’t had a dramatic impact on a polarized electorate, with 47% of Americans supporting impeachment and 46% opposing, according to the most recent polling average from FiveThirtyEight. While 85% of Democrats back the president’s impeachment, only 43% of independents and 9% of Republicans do.

Pelosi’s House majority depends in large measure on re-electing the 31 Democrats who represent districts won by Trump in 2016. And Trump campaign manager Brad Parscale has tweeted internal polling in recent days showing that voters in those districts oppose impeachment.

Republican Ken Buck of Colorado offered some back-handed advice to Democrats during a Judiciary Committee hearing last week: “Well, I tell my colleagues, go ahead, vote to impeach President Trump tomorrow. But when you walk out of this hearing, call your freshman colleagues and tell them they’re not coming back, and you hope they’ve had their fun.”

But Pelosi is trying to demonstrate -- with her decision to back Trump’s trade deal with Mexico and Canada and with the spending agreement -- that Democrats are still getting other things done. And party leaders argue their majority has a constitutional obligation to address Trump’s behavior, even if it isn’t politically beneficial.

“If Congress cannot fulfill its duty to act as a check and balance against the executive,” Nadler warned at the start of a two-day hearing last week, “the president becomes a dictator.”

Pelosi herself deflected questions about how she can say Trump is an existential threat to democracy on one hand, but then work with the Trump administration to get something like a trade deal done. Her explanation is that House Democrats need to continue working for the American people, regardless.

“I would say that we came a long way from what he originally proposed, and there are some people who said, ‘Why make it look like he has a victory?’” Pelosi said this week. “Well, we’re declaring victory for the American worker in what is in this agreement.”

Democrats understand that legislative accomplishment on matters important to voters is key to them keeping their House majority -- and to get things signed into law requires cooperation from the president. Plus, disposing of impeachment clears the way for them to focus on legislation that their constituents say they care more about.

“We’ve got to show we can walk and chew gum,” said Karen Bass of California, adding that, “It’s not about pulling victories away from the president.”

(Updates with statement from report starting in fourth paragraph)
Published on
Updated on
Have a confidential tip for our reporters?
GET IN TOUCH
Before it's here, it's on the Bloomberg Terminal.
LEARN MORE