By
Eric Lam
and
Aaron Mc Nicholas
Updated on 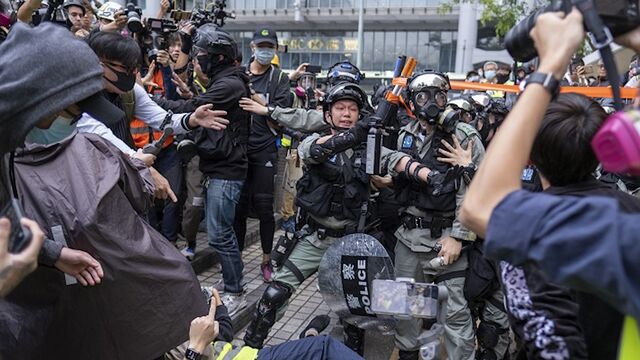 Hong Kong leader Carrie Lam’s government again pushed back on a key demand of protesters as a downtown rally turned violent, showing the unrest that began last June still has no end in sight.

In a lengthy statement on Sunday, a government spokesman recapped failed attempts to implement a promise of universal suffrage since China took control of the former British colony in 1997. It said that Hong Kong’s residents need a “clear understanding” that any chief executive elected by all citizens shall also be accountable to Beijing.

“This is the constitutional order under the ‘one country, two systems’ principle which should not be ignored,” the spokesman said. “The community needs to attain a consensus on these principles, and premised on the legal basis, to narrow differences through dialogues under a peaceful atmosphere with mutual trust.”

“Any constructive discussion on the issue of constitutional development would be difficult to commence if the aforesaid cannot be achieved,” it added.

The statement, which mimics the same stance Beijing has held on universal suffrage since 2014, shows that Lam’s government still isn’t budging on the core demand driving the protests. The unrest has plunged Hong Kong into its first recession since the global financial crisis, with the retail and tourism sectors particularly hard hit.

Traffic through Hong Kong International Airport declined across the board last year as protesters conducted sit-ins and disrupted transport routes. The airport handled 71.5 million passengers in 2019, down 4.2% from a year earlier, the Airport Authority Hong Kong said Sunday. Flight movements fell 1.9%, while total cargo throughput declined 6.1% from a year ago to 4.8 million tonnes.

The demonstration on Sunday started peacefully in Chater Garden in the Central business district, with speeches and music drawing in thousands of people. But police ordered the rally to end early, citing violent behavior by protesters who fanned out from the approved meeting area.

Four officers were injured, including two from the Police Community Liaison Office, who suffered head wounds after being attacked with wooden sticks and other weapons near the rally, according to police. The officers weren’t wearing riot gear and were beaten as they tried to flee, the police said in a statement, accusing protesters of throwing bricks, committing arson and damaging public facilities during a “rampage.”

Ng Lok-chun, the police force’s senior superintendent of operations, refuted accounts by the organizers to the media that the officers who were attacked had disguised themselves in plain clothes. Ng said that’s not true because these officers have been in contact with the organizers in the past.

“This is certainly ridiculous and irresponsible,” Ng said at a late night briefing. “The organizer certainly is acquainted with those injured officers.”

One of the organizers of Sunday’s rally, Ventus Lau of the Hong Kong Civil Assembly team, said his goal was to get the world to focus on the city again after global headlines turned to Taiwan’s election and the crisis involving Iran. He also insisted protesters would keep fighting for meaningful elections.

“If the government refuses to give us universal suffrage, this is a clear sign that they are still suppressing our human rights, our freedom and our democracy,” Lau said.

During the rally, police scuffled with demonstrators and handcuffed a number of people who blocked roads and set fire to barricades. Tear gas was used to disperse the crowd, Ng said.

Eight people who were stopped and searched -- a practice the organizers opposed -- were also arrested for carrying items such as hammers, spanners and batons, which have been used to attack police officers in the past, he said.

One of the organizers was also arrested for “repeatedly” obstructing officers, Ng said, without identifying the person. The South China Morning Post said Lau was arrested.

Beijing has stuck to a proposal for universal suffrage that it outlined in August 2014, triggering the Occupy protests. The plan would’ve required nominees to be screened by a committee stacked with Beijing loyalists in Hong Kong before being put to a public vote, with a requirement that the person “loves the country and loves Hong Kong.”

The protests were ignited by a bill to allow extraditions to mainland China that the government subsequently withdrew. The demonstrators’ demands have broadened to include an independent inquiry into police conduct and universal suffrage for both the Legislative Council and chief executive.

Lisa Lau, a former member of the Independent Police Complaints Council, the group the government has tasked with finding accountability, said the body is hobbled by a lack of investigative powers, Ming Pao reported Sunday. She added the group has not yet met with the police commander in charge of the July incident in Yuen Long when subway riders were violently attacked, it said.

Lam is due to attend the World Economic Forum in Davos, Switzerland, this week to “remind global political, business and media leaders” of the city’s resilience. Her government’s statement on Sunday also condemned protester calls for foreign governments to sanction alleged human rights offenders from Hong Kong.

“Foreign governments, legislatures or organizations have absolutely no role in matters relating to the constitutional development of Hong Kong, and should not express any opinion or take any action in an attempt to influence or interfere in the discussions of related matters in Hong Kong,” it said.

— With assistance by Iain Marlow

(Updates with details from police statement in eighth paragraph.)
Published on
Updated on
Have a confidential tip for our reporters?
GET IN TOUCH
Before it's here, it's on the Bloomberg Terminal.
LEARN MORE