By
Dana Hull
and
Emily Barrett
Updated on

By
Dana Hull
and
Emily Barrett
, 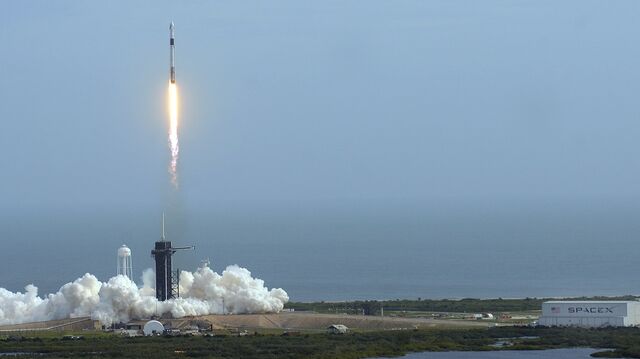 Elon Musk’s rocket company passed a crucial safety test Sunday, clearing its last major hurdle to an historic first crewed flight for NASA, possibly in the first half this year.

The hardware necessary for the first launch with astronauts will probably be in place by the end of February, Musk said at a press conference with NASA and SpaceX representatives following the test. The “collective wisdom” among his colleagues was that an inaugural flight was possible in the second quarter of 2020, he said.

Sunday’s test shows SpaceX can safely abort a mission if something goes wrong after takeoff. It was delayed from the previous day due to poor conditions in the recovery area. Musk described the safety test as “picture perfect,” and congratulated the respective teams on their dedication.

“I’m super fired up, this is great,” Musk added. “It appears probable that the first crewed launch could occur in the second quarter.”

NASA Administrator Jim Bridenstine noted a number of parachute tests are still required prior to a crewed launch. Kathy Lueders, manager of the NASA commercial crew program, noted the “flawless execution” of the abort mission.

The Falcon 9 rocket with Crew Dragon spacecraft launched from Kennedy Space Center in Florida at 10:30 a.m. About 84 seconds after liftoff, SpaceX demonstrated Dragon’s ability to eject from the rocket during an emergency.

Splashdown of Crew Dragon in the Atlantic Ocean! pic.twitter.com/V1C2Xfd9Mk

The in-flight abort test included a series of complex maneuvers before Dragon’s parachutes deployed, according to SpaceX’s press kit, and the craft splashed down in the Atlantic Ocean about 10 minutes after liftoff. The Falcon 9 rocket broke up offshore, as planned.

Americans have not flown into space aboard a U.S. craft since the shuttle program ended in 2011. Sending astronauts to the space station also is an important step for Musk’s Hawthorne, California-based company. The billionaire aims eventually to transport people to the Moon and Mars.

NASA awarded SpaceX and Boeing Co. a combined $6.8 billion in contracts in 2014 to revive America’s ability to fly to the space station without buying seats on Russian Soyuz capsules. Since then, the agency and both companies have suffered delays that have put the program more than two years behind schedule.

In December, Boeing’s Starliner failed to dock with the station because of a problem with the mission’s timing software. The Chicago-based company and NASA are investigating, and the agency will decide if Boeing needs to perform a second flight without crew.

(Updates with comments from press conference.)
Published on
Updated on
Have a confidential tip for our reporters?
GET IN TOUCH
Before it's here, it's on the Bloomberg Terminal.
LEARN MORE