By
Samer Al-Atrush
,
Patrick Donahue
, and
Ilya Arkhipov
Updated on 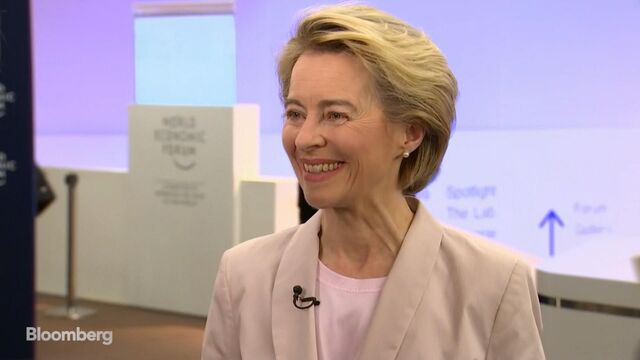 World leaders meeting in Berlin agreed to work toward a more durable cease-fire in Libya’s civil war, which has seen Russia and Turkey giving military support to opposing groups as countries outside Libya jockey for access to its energy resources.

Eastern commander Khalifa Haftar, who is backed by Russia but walked out of truce talks in Moscow last week, and Libya’s internationally recognized Prime Minister Fayez al-Sarraj will now put forward five names each for a committee to hash out the terms of a more permanent halt to fighting, with the United Nations pushing for a meeting of that group in Geneva within days.

Still, some five hours of talks in Germany on Sunday showed how global powers are struggling to find solutions to a conflict that’s raged for years and disrupted almost all oil output from the North African country. Haftar has led a months-long assault on Tripoli, and fighting continued outside the capital over the weekend. New York crude rose as much as 2% to $59.73 a barrel in early Asian trading.

Neither Sarraj nor Haftar were in the room for the summit on Sunday, and organizers were careful to ensure they did not cross paths in Berlin. Instead they were holed up for some of the day at separate hotels in the city.

Amid the peace effort, Libya’s national oil company said output is set to tumble to the lowest level since August 2011 after armed forces shut down a pipeline and Haftar supporters blocked oil exports at ports under his control. Serious questions also remain about the ability to monitor forces, get ragtag fighters to put down guns and end continued violations of a UN arms embargo.

“There was progress made towards a full-fledged ceasefire, a truce, temporary stand-down,” Pompeo told reporters aboard his plane after leaving the Berlin talks. “There’s still a lot of work to do.”

If Haftar, who has led a months-long assault on the capital, Tripoli, relents and agrees to a truce deal alongside Turkey-backed Sarraj, the next phase would involve Libyan officials working to unite the country’s institutions and hold elections for the first time since 2014.

“I’m not under any illusion that this won’t be a difficult path,” German Chancellor Angela Merkel told reporters on Sunday evening. She met separately with Haftar and Sarraj before the conference officially began.

Merkel said the leaders who attended -- they included Russian President Vladimir Putin and Turkish President Recep Tayyip Erdogan -- agreed not to provide more military support to those inside Libya, and to work toward a political solution. And she said a fair distribution of Libya’s oil revenues would be part of any peace process.

Failure to get Haftar completely on board risks seeing the holder of Africa’s largest proven oil reserves spiral into a major conflagration drawing in regional and international powers further, as happened in Syria. Russian mercenaries back Haftar’s forces, officials have told Bloomberg, and he has support from Egypt and the U.A.E., who see him as a bulwark against Islamic extremists. Turkish soldiers are training forces loyal to Sarraj, and Turkish-backed Syrian rebels have also joined the conflict.

Pompeo said the U.S. hopes that the partial shutdown of Libyan oil exports “will be opened up as a result of this conversation” in Berlin. He didn’t elaborate.

In a communique issued at the end of the meeting, which included Egypt and the U.A.E., countries said they would commit to “refraining from interference in the armed conflict or in the internal affairs of Libya and urge all international actors to do the same.“ They also called on the UN Security Council to put appropriate sanctions on “those who are found to be in violation of the cease-fire arrangements.”

UN Secretary-General Antonio Guterres said he expects the military officials from the warring sides to meet “in the next few days.”

“I cannot stress enough the summit’s conclusion that there is no military solution to the conflict in Libya,” he told reporters. “All participants have mentioned it several times during the meeting, even those that are more directly involved in the conflict itself.”

Officials from the U.A.E and Egypt used the meeting to urge Haftar to agree to a deal, according to a senior Arab official with knowledge of the discussions. But it’s unclear how much he listened to their arguments, the person said.

The summit should be seen as only a small step given Sarraj and Haftar were not part of the formal talks, according to a senior U.S. official who asked not to be identified discussing the meeting. For a real shot at ending the fighting the main protagonists need to be more involved, the official said, and it’s not even clear they have sufficient control of their fighters to ensure a cease-fire holds.

Oil, Empire and War on Jihad: What World Powers Want in Libya

Acting Russian Foreign Minister Sergei Lavrov told reporters in Berlin the conference had been “rather useful.”

“The Libyan sides have made a small step forward since their meeting in Moscow” last week, he said. But “it is clear that it is not yet possible to establish a stable serious dialog between them. The differences in approaches are too great.”

Libya has been in turmoil since the 2011 NATO-backed ouster of Muammar Qaddafi, which ushered in years of instability that has left thousands dead, allowed Islamist extremists to dig in, and divided the country between rival administrations in Tripoli and the eastern city of Tobruk.

The North African nation is also a gateway for refugees into Europe, so an end to the chaos there would be a critical achievement for governments on the continent grappling with anti-immigrant sentiment. It would also remove a key uncertainty for the oil market. On Sunday, Libya’s biggest oil field began to halt production after unidentified protesters shut down a key pipeline, compounding the other supply disruptions.

Russia and Turkey are jockeying for influence in the Mediterranean, and have been key in the latest push for a Libyan cease-fire. Turkey recently signed a maritime border deal with Sarraj’s government that would be key to Ankara’s aspirations for more clout in the resource-rich waters of the Mediterranean. Turkish contractors would also like to revive billions of dollars in contracts abandoned in the chaos after Qaddafi’s overthrow.

What’s Behind Nine Years of Turmoil in Libya: QuickTake

Access to Libyan oil is a major incentive for Putin, who may also use his leverage to secure concessions from Erdogan in both Libya and Syria. Erdogan attended the summit though he departed more than 30 minutes before it ended, leaving his foreign minister behind in Berlin.

The U.S. has been paying more attention to the Libyan conflict since Russia’s entry and was represented in Berlin by Pompeo.

Washington had held Libya at arm’s length since the killing of the American ambassador in Benghazi in 2012, and under President Donald Trump, sent mixed messages to Libya’s rival administrations. But it became more involved in pushing for an end to the fighting after Russian mercenaries were deployed in September.

(Updates with latest oil disruptions in fifth paragraph.)
Published on
Updated on
Have a confidential tip for our reporters?
GET IN TOUCH
Before it's here, it's on the Bloomberg Terminal.
LEARN MORE