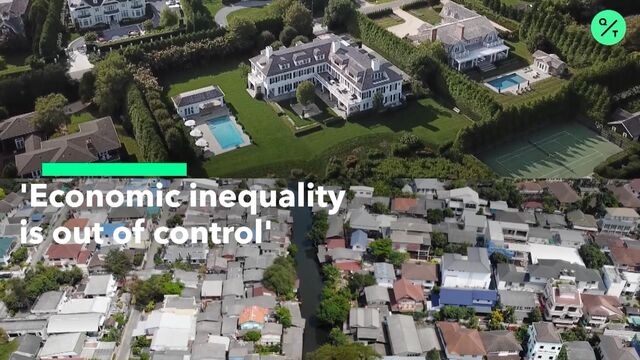 Inequality's Out Of Control, Says Oxfam

Global inequality is going to worsen unless governments do more to ensure those most affected by rapid technological change aren’t just cast aside and forgotten, according to the World Economic Forum.

As it prepares for its annual Davos gathering of leaders from the worlds of business, politics and finance, the WEF said it’s time to change the fact that a person’s lot in life is still largely determined by their socio-economic status at birth. The result, it said, is that societies “too often reproduce rather than reduce historic inequalities.”

In its Social Mobility Report, the WEF said Europe scores well, particularly Nordic countries, with Japan in 15th place and the U.S. down in 27th.

But it said problems are widespread and most countries underperform on three key metrics -- low wages, lack of social protection and poor lifelong learning systems.

Those long-running issues have fed a growing sense of unfairness -- even where economic measures suggest inequality is broadly narrowing -- and an erosion of trust and disenchantment with politics. The WEF said giving everyone the chance to fulfill their potential would not only improve personal wellbeing, but also bring broader benefits by boosting economic growth.

“Inequality has become entrenched and likely to worsen amidst an era of technological change and efforts toward a green transition,” it said.

The Forum makes a number of recommendations for change in its report. They include altering personal taxation and addressing wealth concentration, improving education to better equip people throughout their working lives, and more social protection for those whose industries are facing upheaval.