By
Jason Gale
and
Crystal Chui
Updated on

By
Jason Gale
and
Crystal Chui
, 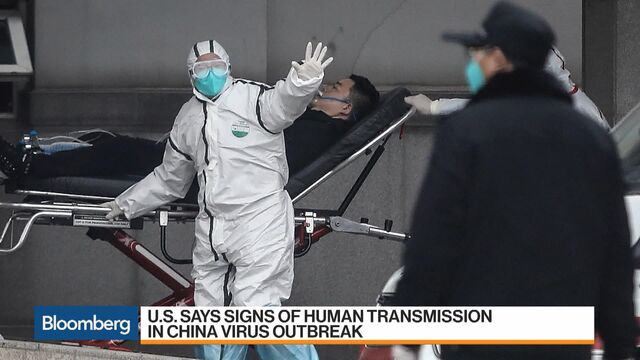 WHO Regional Director on Pneumonia Outbreak in China

A new SARS-like virus that originated in central China is spreading from person-to-person and has sickened medical workers, heightening concern about the risk of wider transmission.

The number of cases in China surged over the weekend and health authorities worldwide increased testing for the virus, which includes symptoms like fever and coughing. With the Chinese New Year just days away -- a holiday season during which the nation’s citizens rack up 3 billion trips across the country to reunite with family -- the spread of the virus could intensify.

Wuhan, the central Chinese city at the center of the outbreak, now has almost 200 confirmed cases, including three fatalities. Infections were also reported in Beijing and the southern Chinese province of Guangdong. Across the region, South Korea detected its first case, adding to those found in Thailand and Japan last week.

The rise in incidences, after the World Health Organization released guidance for diagnostic detection of the coronavirus Friday, confirmed that the new pathogen is being transmitted among humans, and not just from animals to humans as was originally hoped.

The organization convened a meeting of its emergency committee for Jan. 22 in Geneva, according to an emailed statement. Members will discuss “whether the outbreak constitutes a public health emergency of international concern, and what recommendations should be made to manage it.”

Chinese State broadcaster CCTV, citing Zhong Nanshan, a researcher for the National Health Commission, also reported that human-to-human transmission of the illness has been confirmed. Fifteen medical professionals have been affected, with one critically ill, according to a report from state news agency Xinhua.

China’s health commission has decided to include the coronavirus in the Class B infectious diseases category, which includes SARS, while taking preventive steps typically used for the most-serious ailments, such as cholera and plague, according to the notice posted on the website late Monday.

Countries across the world stepped up screening of incoming travelers ahead of the Chinese holiday that starts this Friday. International airports in New York, Los Angeles and San Francisco started screening from late Friday, joining cities in Asia that implemented surveillance measures days after the outbreak was reported on Dec. 31.

In Wuhan, health-care workers spread out across the city of 11 million, screening for symptoms among people on planes and at railway stations. It’s possible that more than 1,700 people in Wuhan have been infected with the virus, Neil Ferguson and colleagues at Imperial College London said in a study Friday. Their analysis was based on cases reported outside China last week, with the assumption that it takes five or six days for someone to feel unwell after being infected, and another four or five days for the infection to be detected.

How China’s Mystery Illness Is and Isn’t Like SARS: QuickTake

Shares of companies in the travel and hotel sectors dropped on fears of a hit to tourism over the Lunar New Year, traditionally a peak period of spending for China’s billion-strong consumer force. Chinese airlines and Macau casino operators were among the biggest losers on Monday, with Air China Ltd. sinking as much as 7.8% in Hong Kong.

The novel coronavirus, known as 2019-nCoV, has triggered alarm because of similarities with the one that sparked SARS 17 years ago. That outbreak started with sporadic infections and gathered speed as it passed though Singapore’s hospitals before spreading around the world, hurting companies and economies.

Coronaviruses are a large family of viruses, some causing illness in people, and others that circulate among animals, including camels, cats and bats, the CDC said. In some rare outbreaks, animal coronaviruses can evolve and infect people, and then spread between people.

The source and transmission routes of the 2019-nCov virus are still unknown, China’s National Health Commission said in a statement on Sunday.

Some of the first group of patients in Wuhan worked or shopped at a seafood market where live animals and wildlife parts were also reportedly sold.

Provincial health authorities in Guangdong confirmed a case Sunday in a 66-year-old Shenzhen resident who developed fever and fatigue on Jan 3. during a five-day trip to Wuhan.

Two cases have been confirmed in Beijing, according to a statement by a local health authority on Monday. The patients, who have a history of travel to Wuhan, have been hospitalized and are in stable condition.

Officials in Thailand reported two cases last week, while Japan confirmed a case on Thursday. All of them either lived in Wuhan or had spent time there, though none was linked to the seafood market.

Health authorities said that as of 10 p.m. Sunday, 25 of the city’s 198 cases had been cured. A further three had been discharged from the hospital. Currently, 170 cases are being treated in isolation wards at various hospitals, of which 126 cases are mild, 35 are severe and nine cases are critically ill.

Of the 136 new patients reported over the weekend, 66 were male and 70 were female; the youngest was 25 years old and the oldest was 89. The most recent illness occurred before Saturday, and initial symptoms were mostly fever, cough or chest tightness, and difficulty breathing.

Chinese authorities said the outbreak is “still preventable and controllable,” in an attempt to reassure the public as hundreds of millions of people prepare to travel ahead of the country’s biggest annual festivities.

(Updates number of medical workers sickened in sixth paragraph and adds China’s classification of outbreak in eighth paragraph.)
Published on
Updated on
Have a confidential tip for our reporters?
GET IN TOUCH
Before it's here, it's on the Bloomberg Terminal.
LEARN MORE