Johnson Stays Away From Davos to Push Populist U.K. Agenda

By
Andrew Atkinson
Updated on

Johnson Stays Away From Davos to Push Populist U.K. Agenda 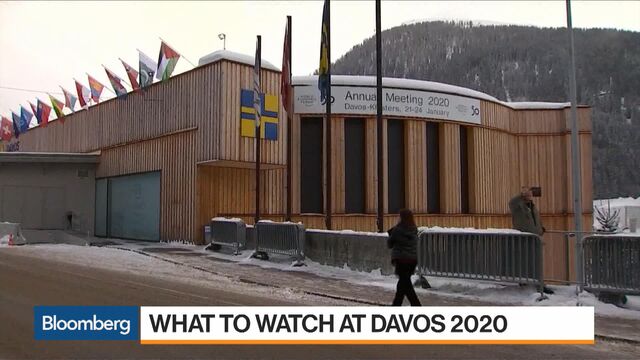 WATCH: This year, there are some high profile no-shows at the annual World Economic Forum in Davos.

As the global rich gather in Davos, Boris Johnson is reminding voters in Britain why he called his new administration the “people’s government.”

The prime minister, who is staying away from the annual jamboree of the World Economic Forum, is considering the idea of moving the House of Lords out of London, possibly to York 200 miles (320 kilometers) north of the British capital.

The shock revelation emerged a day after Chancellor of the Exchequer Sajid Javid warned business leaders to expect divergence from European Union rules after Brexit, whether or not a free-trade deal is concluded by the end of 2020.

Johnson reinforced his vision of a “global Britain” trading freely outside the EU on Monday at an inaugural investment summit with African leaders. He called for the U.K. to be the “investment partner of choice” on the continent.

Johnson won a commanding majority in the general election by persuading pro-Brexit districts in northern England and the Midlands to back his Conservative Party for the first time. He did so by promising to take Britain out of the EU on Jan. 31, but he must now deliver economically if he’s to retain their support.

The premier has spoken repeatedly about “leveling up” across the U.K. and the budget due in March is expected to include billions of pounds of new infrastructure projects to boost the economy of northern England, which has been hit by a decade of austerity and the decline of heavy industry.

In an indication of his new focus, ministers on Sunday confirmed that the House of Lords -- the upper, unelected chamber of Parliament -- could be moved permanently to York, an historic city of little more than 200,000 people, or Birmingham in central England. The news was first reported by the Sunday Times.

“It’s one of range of things we are looking into. It’s about demonstrating to people we are going to do things differently,” Conservative Party Chairman James Cleverly told Sky TV’s “Sophy Ridge on Sunday” show. “The Labour Party lost millions of voters because they failed to listen.”

Suspicions that Johnson might use his House of Commons majority to sever ties with Brexit hard-liners in his party and deliver a soft divorce appeared to be quashed by Javid in an interview with the Financial Times published Saturday.

The chancellor said Britain would no longer abide by EU regulations and businesses needed to adjust, raising the stakes as the government prepares to embark on trade talks with the EU. Johnson has given himself just 11 months to tie up a deal. If he fails, Britain will be headed for another cliff-edge Brexit at the end of the year.

Javid’s comments prompted dismay among businesses, which fear divergence could cost billions of pounds with sectors such as car making, aerospace and food manufacturing bearing the brunt. Carolyn Fairbairn, director general of the Confederation of British Industry lobby group, said alignment had supported jobs and competitiveness in some of the most deprived regions of the U.K.

Johnson also appears to be on a collision course with businesses over immigration, with reports that the government is proposing to bring in restrictions on low-skilled migrants at the end the year, two years earlier than planned.

As Britain leaves the EU, Johnson is seeking to build economic ties with fast-growing regions, such as Africa. He addressed the U.K.-Africa Investment Summit in London, with the government promising 620 million pounds ($804 million) of financing to spur U.K. exports to Ghana, Zambia, Gabon and Uganda.

“Africa is the future and the U.K. has a huge and active role to play in that future,” Johnson said.

The gathering underscores fears that Britain risks losing out in the region. China, already a huge investor on the continent, hosted dozens of African leaders in 2018 and Russia, an expanding presence, followed suit last year. France and Turkey are also aggressively pushing trade on the continent.

Johnson also said the U.K. will halt all support for thermal coal mining or coal power plants overseas as part of efforts to tackle climate change.

— With assistance by Stuart Biggs, Olivia Konotey-Ahulu, and Steve Geimann

(Updates with Johnson comment three paragraphs from bottom)
Published on
Updated on
Have a confidential tip for our reporters?
GET IN TOUCH
Before it's here, it's on the Bloomberg Terminal.
LEARN MORE