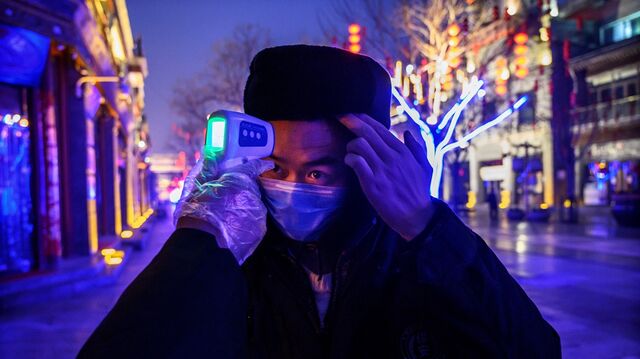 WATCH: China’s revisions to coronavirus data are making it more difficult to gauge the true scope of the outbreak. Tom Mackenzie reports from Beijing.

Wuhan, the Chinese city where the outbreak is centered, further tightened its already-strict quarantine on residents, saying people won’t be allowed to leave their neighborhoods except to seek medical care, help with medical and quarantine work, or assist in vital functions.

Egypt confirmed its first case of the virus. Health authorities in China told people returning to Beijing to stay home for two weeks of observation, according to a report by Beijing Daily.

Automaker General Motors Co. said it’s trying to stop some of its U.S. plants from running out of China-sourced parts, and Fiat Chrysler plans to idle an assembly plant in Serbia because of a lack of components. Another cruise liner was turned away from port, this time in Vietnam. China said more than 1,700 medical workers had contracted the virus as of Feb. 11.

Click VRUS on the terminal for news and data on the novel coronavirus and here for maps and charts. For analysis of the impact from Bloomberg Economics, click here.

The Chinese city of Wuhan tightened its quarantine on residents and said people will be confined to their neighborhoods except to seek medical care, work to fight the outbreak or keep vital services going.

More From
Prognosis
A Fast-Moving Virus Pits Treating Patients Against Finding a Cure
India Bans All Exports of Trump’s ‘Game Changer’ Virus Drug
Sweden Girds for Thousands of Deaths Amid Laxer Virus Policy
N.Y. Has Most Deaths in a Day; Italy Has Fewer: Virus Update
Read more from Prognosis

The notice from the city government, posted in a statement, further tightens the already drastic measures taken by the city to stop the virus. Wuhan has opened quarantine centers to house thousands of patients and others with symptoms, and Hubei province, where Wuhan is located, has announced thousands of new cases a day.

Under the new rules, most Wuhan residents will be allowed to leave residential compounds only for medical care. Other cities that have put lockdowns in place have allowed people to leave every few days to buy food. It wasn’t immediately clear from the statement how Wuhan’s residents would be able to get food or other supplies.

Under the new rules, some neighborhoods will be barricaded off to keep people from getting in or out, and non-residents won’t be able to enter neighborhoods that aren’t theirs.

In Egypt, a foreigner tested positive for the coronavirus, state news agency MENA reported, citing a statement from Egypt’s health ministry and the World Health Organization Friday. It’s the first confirmed case of the virus in the country.

The patient was put into quarantine and hasn’t shown symptoms of the virus, according to the report.

General Motors Co. is trying to shield some of its most profitable U.S. plants from running out of components sourced from China, a spokesman said, after a union member at one factory wrote that the threat of a parts shortage at the factories is growing.

Smoking may play a role in the severity of infections caused by the coronavirus in China and merits more study, a World Health Organization official said Friday.

Chinese men have had more severe cases of the virus than women and also smoke at higher rates, Michael Ryan, executive director of the WHO Health Emergencies Programme, said at a press conference in Geneva.

The virus can cause pneumonia as it infects patients’ lungs, which can be weakened from cigarette use. China has higher overall rates of smoking than much of the rest of the world, according to WHO data.

“It’s an excellent hypothesis, but one that is unproven,” Ryan said. “There will be a lot of interest in looking at smoking as a risk factor.”

People returning to Beijing should stay at home for observation for 14 days upon arrival, Beijing Daily reported, citing a notice issued Feb. 14 by local health authorities. The publication is affiliated with the Communist Party’s Beijing committee.

People who plan to return to the city are being told to report ahead of time to their employers as well as residential communities in which they live, according to the report.

U.S. researchers published new images of the coronavirus, some of the most detailed visuals yet of the pathogen.

The images were released Thursday by the U.S. National Institute of Allergy and Infectious Diseases. They were made with scanning and transmission electron microscopes.

American experts are preparing to travel to China to investigate the outbreak and are waiting for final clearance from the Chinese government, Azar said on CNN. China said earlier that it welcomes U.S. participation in a joint mission with the World Health Organization, as it sought to fend off criticism over transparency.

While the U.S. hopes the coronavirus will spread at a slower pace in warm weather, it’s preparing for that not being the case, he said, adding that the impact in the U.S. is very limited for now.

Harrods Department Store Co., a big tourist attraction in London for Chinese shoppers, has prohibited staff from wearing masks when dealing with customers because of the “risk of spreading further anxiety” about the virus. The World Health Organization has said that non-infected people should wear face-masks only if they’re caring for someone who is infected. The WHO advises that people who are coughing or sneezing wear face masks, as the disease can spread via droplets of saliva.

Hong Kong’s government received consent from Disneyland to use part of its land for quarantine purpose, Secretary for Commerce and Economic Development Edward Yau said. Hong Kong will seek approval from its legislature for at least HK$25 billion ($3.2 billion) in funding to buffer the impact of the virus on the city.

The Singapore government said it’s “clearly emerging” that the virus is different from SARS. Coronavirus is closer to H1N1 because it’s more easily spread; its mortality rate is however lower than severe acute respiratory syndrome, according to Lawrence Wong, minister for national development who co-chairs a task force coordinating the city-state’s virus response. Singapore reported 9 new cases, lifting the total in the country to 67.

Fiat Chrysler Automobiles NV is planning to halt operations at its assembly plant in Serbia due to a lack of parts from China because of the coronavirus, people familiar with the matter said.

The stoppage at a factory that makes the Fiat 500L would mark the first time a European carmaker has had to idle a facility in Europe due to the virus. The move shows how the outbreak is disrupting global supply chains.

The LME has postponed its May 6 Asian seminar in Hong Kong, one of the main events of the year for the metals industry, citing concerns about the spread of the coronavirus.

An AIDA Cruises Ltd. ship with more than 1,100 European passengers canceled plans to visit Vietnam after a provincial government enforced a directive barring those on cruise liners that were in China recently from disembarking due to coronavirus concerns.

The AIDAvita canceled its docking plans in Quang Ninh after the local government notified the liner it would turn away passengers, according to a representative with the province’s maritime authority.

Vietnam is the latest country to restrict some cruise ships from berthing. Carnival Corp.’s Westerdam was finally welcomed by Cambodia this week after it was refused by multiple ports, while another liner, the Diamond Princess, has been quarantined in Japan.

AstraZeneca Plc signaled that a long-awaited profit rebound will be dented by the impact of the coronavirus, as China is one of the U.K. drugmaker’s key markets. The company’s shares traded lower.

Royal Dutch Shell Plc sent some staff home from its trading desks in Singapore after an employee was found to have had contact with a coronavirus case. As a precautionary measure, Shell advised colleagues who had close contact with the employee to work from home until further notice.

The People’s Bank of China is planning to underpin new-loan growth in the first quarter by taking a softer stance on property-related loan quotas, according to people familiar with the matter, in another bid to protect the economy from the fallout of the coronavirus outbreak.

China’s state-owned medical products maker is collecting plasma from the blood of patients who have recovered from the novel coronavirus after discovering its efficacy in helping those critically ill from the infection.

China National Biotec Group Co. has been using this plasma, which contains highly potent antibodies, to treat more than 10 seriously ill patients since Feb. 8, the company said. It claimed that those receiving the treatment improved within 24 hours, with reduced inflammation and viral loads along with better oxygen levels in the blood.

Bank of Korea Governor Lee Ju-yeol warned that the spread of the viral illness could have a negative impact on the economy and said the central bank is preparing measures to extend financial support to struggling businesses.

“We hope the coronavirus outbreak won’t last for long, but considering the South Korean economy’s high correlation with China and the weakening in sentiment, some damage to the economy is unavoidable,” Lee said in a meeting with Finance Minister Hong Nam-ki and financial regulators in Seoul.

Japan was set Friday to start allowing certain passengers to start disembarking the Diamond Princess cruise ship, quarantined in Yokohama. Those who test negative for the new coronavirus and are of advanced age are eligible to leave, Health Minister Katsunobu Kato told reporters in Tokyo.

Carnival’s Diamond Princess was placed under quarantine last week as it approached Yokohama. As of Thursday, 218 people on board were confirmed as infected -- the most of any spot outside of China.

China’s deaths from the coronavirus rose by 121 as of Feb. 13, the National Health Commission said. The figure was revised as 108 cases were removed due to double-counting in Hubei province.

Tracking the coronavirus in China has become more complicated after Hubei revised its method to diagnose cases. World Health Organization officials said that a surge in cases reported earlier this week involved older infections and didn’t represent a sudden surge.

Cities in the Chinese province of Hubei with a large number of coronavirus infections need to step up quarantine and medical treatment measures, according to a group of top officials fighting the outbreak.

Cities including Xiaogan and Huanggang need to elevate their response to the same level as those adopted by Wuhan, the city in Hubei at the center of the virus outbreak, the group, which was established on Jan. 25 under the Politburo’s management, said at a meeting.

Among the new cases in Hubei, the Chinese province at the epicenter of the coronavirus outbreak, 3,095 were diagnosed using CT scans -- the new testing method -- while the rest were confirmed with the traditional diagnostic process that uses nucleic acid tests.

Hubei also reported 116 additional deaths, including eight from clinical diagnosis. There have been three deaths reported outside of mainland China: in Hong Kong and the Philippines, and one fatality reported in Japan on Thursday.

Toy production will be delayed in the first quarter because of the coronavirus, Mattel Inc. executives said on a conference call.

While Mattel has no manufacturing in Wuhan, the city at the center of the epidemic, Chinese government guidelines are affecting the availability of a manufacturing work force elsewhere. Mattel’s factories were scheduled to restart Feb. 3, but now production won’t resume until Feb. 17.

Royal Caribbean Cruises Ltd. has canceled 18 sailings and rejiggered itineraries in response to the coronavirus outbreak, putting a crimp on the cruise company’s 2020 profit.

The upheaval will reduce earnings by 65 cents a share this year, Royal Caribbean said. And if the company has to cancel its remaining departures in Asia through the end of April -- something it’s not currently planning to do -- it would lop an additional 55 cents off its outlook.