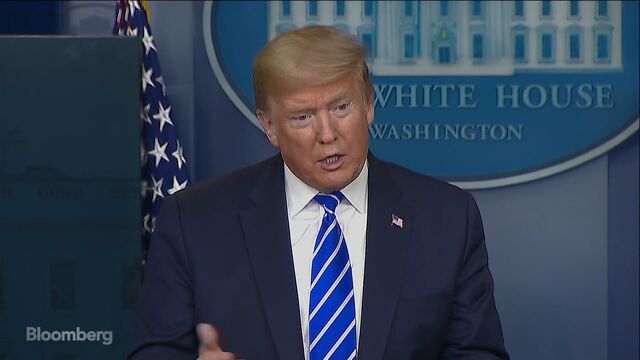 Trump: Is There a Way We Can Do Something With Disinfectant?

Donald Trump’s evolving public statements and ad hoc policy swings on the coronavirus outbreak have the White House on defense as surveys show increased doubts about his leadership in crisis.

On Wednesday, Trump rebuked the first governor to try to reopen his state economy -- Georgia’s Brian Kemp, a Republican -- after encouraging state leaders for weeks to push forward toward resuming a normal social and business life.

Earlier in the week, Trump declared he would “temporarily suspend immigration” to the U.S. in a late-night tweet, only to roll out a hastily drafted executive order pausing green cards for two months after an outcry from business leaders and their Republican allies.

The coronavirus pandemic is exposing the limits of Trump’s unconventional politics and governance, with more than 47,000 Americans dead since February. Trump’s mastery of a bitterly partisan modern political and media landscape got him to the Oval Office, where unorthodox policy, personal feuds and a consequences-be-damned mentality helped him dominate headlines and dodge controversies that would have sunk most politicians.

Now, the White House is struggling to remain coherent as public confidence in Trump’s handling of the crisis ebbs. More than 50% of Americans now disapprove of his’s response to the outbreak, compared to 46% that approve -- a gap that has widened this week, according to an analysis of polling data by fivethirtyeight.com.

The Associated Press and NORC at the University of Chicago published a poll Thursday finding that just 23% of Americans consider Trump a trustworthy source of information on the virus, while 52% trust their state and local leaders.

“Any suggestion that President Trump is struggling on tone or message is completely false,” a White House spokesman, Judd Deere, said in a statement. “During these difficult times, Americans are receiving comfort, hope and resources from their president, as well as their local officials, and Americans are responding in unprecedented ways. Every level of government needs to deliver solutions and that is what we are doing in partnership to save lives, not play politics.”

Trump’s muddled message on reopening the country and who should lead the effort helps explain his slide in polls.

Last week, he declared he had total authority in the matter. After being accused of constitutional overreach, he released government guidelines that largely shifted the burden to governors and municipal and business leaders. Still, he maintained that if he thought a state leader was acting recklessly but reopening too quickly, he “would overrule a governor, and I have the right to do that.”

Then when Trump supporters mounted scattered protests against state social distancing restrictions that have crushed the economy, the president encouraged them and said some governors -- namely Michigan’s Gretchen Whitmer, a Democrat who is considered to be on Biden’s short list of running mates -- had gone too far.

But when Georgia’s Kemp announced he would allow barber shops, tattoo parlors, bowling alleys and other businesses to reopen as soon as Friday, Trump criticized the plan as too aggressive -- while abandoning his pledge to intervene. Trump said Thursday he had discussed the matter with his health officials, who all agreed Georgia was moving too quickly.

“I could have stopped him but I decided -- but I decided and we all agreed, we’re going to watch it closely,” Trump said, adding that he wasn’t “happy about it.”

Trump’s prohibition against new green cards traveled a similarly convoluted path. Late Monday, he said in a tweet that he would suspend immigration to protect the jobs of American citizens. More than 26 million Americans have filed for unemployment benefits in the past five weeks.

The tweet, which the White House left unexplained for nearly an entire day, alarmed both immigrants and their families in the U.S. as well as American business leaders, who depend on immigrant labor for everything from picking crops to designing software. Congressional Republicans met with Trump on Tuesday and discussed the ban.

When the actual executive order appeared Wednesday, it was far less expansive than Trump suggested in his tweet. The president paused the issuance of green cards to foreigners applying overseas for at least 60 days. The State Department last month had already temporarily suspended routine visa services at embassies and consulates.

Each policy pivot has appeared rooted in the president’s instinctive reaction to daily media coverage of the crisis, and his stated desire for press coverage complimentary of his response. Yet that impulse can also lead Trump to create political traps for himself, unforced -- as he did on Wednesday, amid his clear frustration with coverage of an interview Centers for Disease Control and Prevention Director Robert Redfield gave to the Washington Post.

Redfield warned in the interview of the danger of a second wave of coronavirus emerging during the fall flu season, complicating detection and treatment efforts, saying that there was “a possibility that the assault of the virus on our nation next winter will actually be even more difficult than the one we just went through.”

But Trump, eager to proceed with an economic recovery as quickly as possible, claimed, incorrectly, that Redfield had been misquoted. The president declared at his Wednesday news conference that it was “possible it doesn’t come back at all,” and that if Covid-19 does return, it “won’t be coming back in the form that it was” but in “smaller doses we can contain.”

His own medical advisers -- including the infectious disease expert Anthony Fauci in the very same news conference -- said the virus will still be active this fall. The president’s political opponents are sure to use his statements as a cudgel if a serious flare-up of the virus emerges in the weeks before voters head to the polls.

Trump’s recent vacillation is only compounded by previous declarations that never came to fruition: His proposed quarantine of the New York metropolitan area during the peak of the virus; his aspiration to have the country “opened up and raring to go” by Easter; a national website purportedly under construction by Google that would direct citizens to virus testing sites in the parking lots of drug stores and retail chains.

The president and his advisers say his statements are intended to be optimistic, while his shifting remarks about the balance between federal and state authority on reopening were never intended to preclude collaboration with governors.

“As POTUS said: He disagrees and believes the timeline is too quick, but he understands governors must make their own calls for their states,” Williamson said. “This has been his consistent position.”

But Democrats are seizing on the contradictions. House Speaker Nancy Pelosi said Wednesday that Trump’s statements and behavior were evidence of “a reluctance on the part of this administration to respect science, knowledge, data, evidence.”

“Information and fact is how you make decisions,“ Pelosi said in an interview with Bloomberg Television. “And there has also been a reluctance to accept the role of government in the solution. If you reject science and you reject government, then you can see why we are in the situation we are in.”