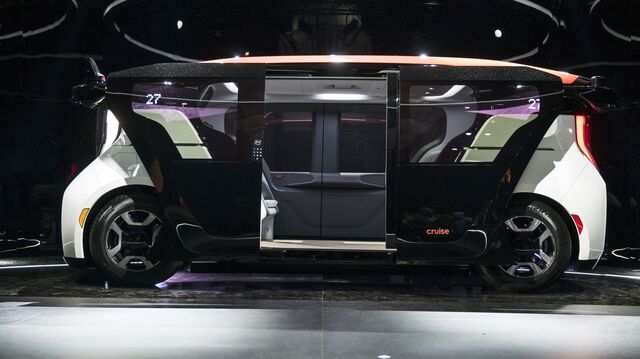 Mary Barra appears on the latest episode of "Leadership Live With David Rubenstein."

General Motors Co.’s top executive expects it will take decades for electric vehicles to take over as the dominant form of transportation but sees driverless cars on the road within five years.

Chief Executive Officer Mary Barra said American drivers will go electric, but it will take a long time for most of the 250 million vehicles on U.S. roads to be battery powered.

“We believe the transition will happen over time,” Barra said on “Leadership Live With David Rubenstein” on Bloomberg Television. When asked if all cars will be electric in 20 years, she said that may be too soon. “It will happen in a little bit longer period, but it will happen.”

That outlook underscores the tricky task Barra will have budgeting billions for new models and deciding which of them will run on battery power. Following inroads made by Tesla Inc., GM is one of the most aggressive carmakers when it comes to electrifying its lineup. It currently sells just one EV in the U.S. but is developing more than 20 plug-in models, including a Cadillac crossover and a Hummer pickup that will both debut by the fall of 2021.

In addition to funding its EV program, GM also is spending about $1 billion a year to fund Cruise LLC, the self-driving car unit the Detroit-based carmaker majority owns. A return on that investment will bear fruit before long, Barra said. Although Cruise canceled plans to launch a ride-hailing service last year and has not set a new date, it is developing a self-driving vehicle that will be dedicated to a robotaxi service.

“I definitely think it will happen within next five years,” she said of of fully driverless cars being deployed. “Our Cruise team is continuing to develop technology so it’s safer than human driver. I think you’ll see it clearly within five years.”

GM overcame friction with the White House involving the production of ventilators needed to respond to the coronavirus outbreak. Barra said the company had been working to build the medical devices before President Donald Trump accused the company in March of dragging its feet.

“They did enact the Defense Production Act, but frankly we were on our way to building ventilators,” she said. “There was a little bit of a misunderstanding, but it’s worked out now and everyone is very pleased.”