Inside the Secret Banking Heavyweight That Aims to Revive It...

Inside the Secret Banking Heavyweight That Aims to Revive It...

Inside the Secret Banking Heavyweight That Aims to Revive It...
Politics 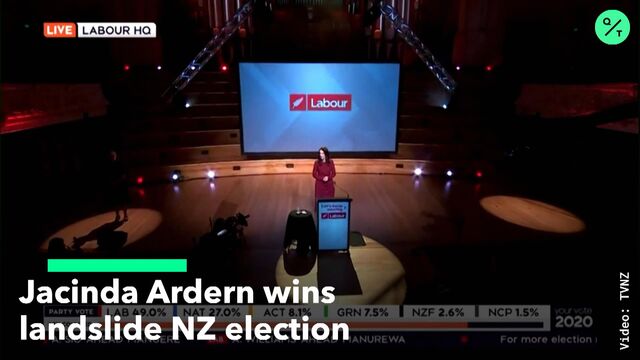 New Zealand Prime Minister Jacinda Ardern swept to an historic election victory and said she will use her mandate to rebuild an economy battered by the coronavirus pandemic and tackle social inequality.

Ardern’s Labour Party secured the first outright majority in parliament since the introduction of proportional representation in 1996 and, if preliminary results stand, its biggest share of the vote in more than 70 years. Ardern said Sunday she wants to form a government within two to three weeks and plans to talk to the Green Party in coming days -- without indicating what role they could play in her new administration.

“I have been a consensus builder but I need to work with the mandate that Labour has been given as well,” she told reporters. “Things that will aid our economic recovery quickly we will need to expedite.”

Ardern, 40, has captured the hallowed center ground in New Zealand politics with a blend of empathetic leadership and skilled crisis management that has also won her fame abroad. Her successful handling of the coronavirus pandemic has demonstrated those strengths, drowning out criticism that she hasn’t delivered on some key promises during her first term in office.

Preliminary results give Ardern 64 of the 120 seats in parliament. Labour won 49% of the vote after a huge swing to the left in many urban and provincial electorates. The opposition National Party slumped to 27%, its worst showing since 2002. Final results, including 480,000 special votes, are due on Nov. 6.

Ardern will now have more scope to deliver the transformational government she promised when she came to power three years ago, particularly if the Greens are able to push her to be more progressive on issues such as poverty and climate change.

Still, she will be wary of alienating the many center-right voters she has won from National at a time when debt is spiraling due to the government’s pandemic response.

Ardern and her ministers were coy on Sunday about what the new administration will look like and whether it will move left or cater to the center ground.

Voters are rewarding Ardern for crushing community transmission of Covid-19 while countries like the U.K., U.S. and even neighboring Australia are still battling to contain the virus.

Ardern was alone among her western peers in pursuing an explicit elimination strategy and imposed one of the strictest nationwide lockdowns in the world.

The economy suffered its most severe contraction since the Great Depression, slumping 12.2% in the second quarter, but the lockdown wiped out community spread of the virus and restrictions were removed sooner than in many other countries. After more than 100 days without community transmission, an outbreak flared in largest city Auckland, but that was also quickly stamped out.

The nation of five million people had gone three weeks without any cases in the community until today, when one new case was reported in Auckland. New Zealand has recorded just 25 coronavirus deaths.

National Party leader Judith Collins said she won’t stand down following the defeat and will work to rebuild her party.

Collins, who struggled to gain traction against the wildly popular Ardern during the campaign, pointed to the economic challenges facing the nation as it recovers from the pandemic.

“New Zealand is in for a tough economic ride and it is going to need better fiscal policy than we have so far seen,” she said.

National has been in disarray, changing its leader twice this year and suffering a string of scandals that eroded its claim to be a stronger team than Labour and a better economic manager.

By contrast, Ardern has been mobbed by crowds on the campaign trail in a repeat of the “Jacinda-mania” first seen in 2017.

The challenges ahead are enormous. The border remains closed to foreigners, crippling the key tourism industry, and unemployment is forecast to rise.

Labour is pledging massive spending on infrastructure to boost the economy and has said it will impose a higher tax rate on income over NZ$180,000 ($120,000) a year to raise more revenue. But Ardern has ruled out implementing the wealth tax proposed by the Greens, who will have 10 seats in parliament after garnering 7.5% of the vote.

“There are good reasons why they might ask us to join up with them in the next government,” he told TVNZ on Sunday. “They’ll want as large a majority as possible.”

Under New Zealand’s electoral system, parties must win 5% of votes or an electorate seat to enter parliament.

Labour’s current coalition partner New Zealand First got just 2.7%, bringing the curtain down on the four-decade political career of its leader Winston Peters, who served as Ardern’s deputy and foreign minister.

The tiny Maori Party may have secured one seat with a narrow victory in an electorate that will need to be confirmed once special votes are counted.