An Obscure American Automaker Now Has the World’s Fastest Car

An Obscure American Automaker Now Has the World’s Fastest Car 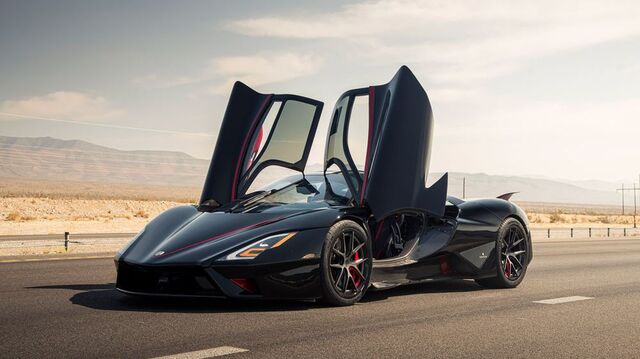 This Is Now the World's Fastest Car

The world has a new fastest car.

Oliver Webb, the 29-year-old Englishman who drove the Tuatara, hit 301.07 (484.53 km/h) mph on his first run and 331.15 mph (532.93 km/h) on his second run in the opposite direction. The average of those times will count as the official fastest time. The record-breaking event was verified by two witnesses sanctioned by Guinness World Records. 1

In an email about the record-setting run, company founder Jerod Shelby characterized it as a David vs. Goliath-style victory.

“People may look at SSC and ask if we belong in the hypercar realm, with such stalwart competitors,” he said. “This record is so extremely sweet, knowing that our small organization just achieved something that much more established brands, with much larger engineering and development teams, and obviously larger budgets, have not been able to achieve.

“This success tastes even sweeter, taking the news of this victory back to our home state of Washington, where we'd only dreamed of this when we'd started this company in a garage.”

SSC is among the most obscure automakers in the world. Formed in 1998 and counting just 24 employees, the privately held company was formerly called Shelby SuperCars Inc., which inspired its current name. A trained engineer who co-founded a medical device company in the early 1990s, Jerod Shelby is not related to automotive entrepreneur Carroll Shelby, who was featured in 2019’s Ford v Ferrari film.)

Unlike such other record-attempting companies as Bugatti, Koenigsegg, and Lamborghini, which draw on deep production runs, deep histories, and deep pockets, SSC boasts no large, supportive automotive group and claims minuscule production volumes. Only 100 of the Tuatara will ever be made—at a rate of roughly 20 per year.

The small footprint of its brand is an asset, said Shelby: Through the design and development phase of the Tuatara, SSC employees were able to make decisions and pivot in real time whenever testing results required design changes. Larger organizations can get caught up in weeks and months of bureaucratic maneuvers just making a simple design decision.

“Many times, where we have observed something during real world testing of a Tuatara that would require a design change to a component or assembly to achieve higher performance, we have literally assembled the design and development team, made a decision, and had newly designed components on a machine being fabricated within hours,” said Shelby via email. “We had new, completed parts out on the road being tested on the car by the next day.”

Named after a lizard native to New Zealand and designed by Jason Castriota, who has designed for Pininfarina, the Tuatara looks like a curvier version of its reptile namesake: It has a low, pointed front with angled headlights that look like eyes; a single windshield wiper that evokes the animal Tuatara’s third eye; and a rear with air vents that look like gills. Underneath the hood, it boasts a 5.9-liter, twin-turbocharged V8 engine that gets 1,750 horsepower on E85 and 1,350 horsepower on 91 octane. It comes with a seven-speed transmission and weighs just over 2,700 pounds. It took 10 years—and multimillions of dollars—to fully develop the car, Shelby says.

A prior SSC car once held the world’s-fastest title: In 2007, Guinness World Records certified the SSC Ultimate Aero as the world's fastest production car after it averaged a top speed of 256.18 mph over two runs in opposite directions.

“It’s all just beginning to sink in,” says the Manchester-born Webb via phone from England. When not setting world records in Nevada, he drives in such endurance races as 24 Hours of Le Mans and the FIA World Endurance Championship. “To go quick, in a straight line, it’s all mental training, not physical. I ate fast-food all week. If you prepare the car correctly, it’s mainly meditative breathing and staying very calm and staying steady—it’s afterwards when the gravity of what you’ve done hits home.”

Now, Webb says, “For anyone who knows the physics of what is possible, and how incredible it is to do something like this, it’s a [Neil] Armstrong moment.”

SSC can’t claim the “halo effect” that involves one car’s success creating hype that brings attention to a brand’s other products—a prime reason for these speed tests, but breaking the record will bring benefits. Bugatti’s speed feat was set on a pre-production prototype, while SSC fans know they can buy a car exactly like the Tuatara that hit top speed: The record was set on a customer car with neither special modifications nor exemptions, right down to the standard carbon fiber seat inside and no additional roll cage. The car utilized Michelin Pilot Sport Cup 2s—the standard customer tires.

“Now that we have this first record, there’s no arguing that we're dealing in the same currency as our hypercar competitors,” Shelby said. “Performance, not history, is our pedigree.”

New models, however, may be coming. For three years, Shelby has been planning a “little brother” to the Tuatara, a scaled-down version produced in higher volumes and at a lower price point.

“It will carry a very similar DNA to the Tuatara but would be naturally aspirated and have horsepower in the 700-800hp range,” Shelby said, estimating a price tag of $400,000 to $500,000. “The Tuatara’s little brother will enable more people to own a car that looks and sounds like its world-record-toting big brother.”

Better yet, “little bro” will come at a fraction of the price. The Tuatara starts at $1.9 million. The first production run of 12 units for 2021 has already been sold.