Inflation Risk Is Rising. Here’s How to Protect Your Investment Portfolio

Buying gold is just one of the available options if talk of rising prices has you worried. 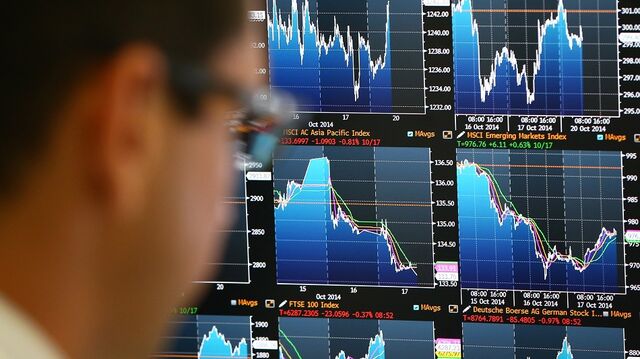 Do you need to start preparing your portfolio for rising prices? It’s a question that’s being hotly debated in financial circles at the moment.

With a new U.S. administration looking to spend big and propel a economic recovery, and the Federal Reserve determined to hold off on raising interest rates until a rebound is well underway, financial markets predict U.S. inflation will drift up to a little over 2%. A gentle uptick is expected in other developed economies as well.

Some economists worry though current forecasts are too sanguine.

They’re concerned that the combination of a big increase in money supply, central banks’ determination not to choke off a recovery, and a possible post-pandemic consumer spending boom spells trouble. What’s more, factors like globalization and cheap labor in China that have kept price growth low for decades are fading.

“It’s a cocktail that could easily spawn a bout of inflation,” said Stephen Miller, advisor at GSFM, a unit of Canada’s CI Financial Group., and a 30-year bond market veteran. “I’m a bit nervous.”

BloombergOpinion
From John Authers
Recent macro numbers suggest that inflation pressures are worryingly high, even if they have not yet broken out. Prices paid by manufacturers, as measured by the ISM survey, are showing the greatest pressure in almost a decade. Meanwhile, unit labor costs, measured quarterly, also suggest that labor is getting more expensive, in a way that hasn’t been seen in decades. So is the market really right to be so confident that inflation will remain under control?
+
Read the full column

Skeptics counter that workers have little bargaining power to push up wages (historically a key driver of inflationary episodes) in an era of high unemployment and low unionization. They argue that predictions after the 2008 financial crisis that easy monetary policy would herald the return of inflation fell flat.

Read More: The Great Inflation Debate Is Heating Up With Trillions at Stake

For the economy as a whole, not all inflation is bad. In a world awash with debt, some inflation would help ease the real burden. But for some investors, especially those who remember the corrosive impact of higher inflation in the 1980s, even hearing the debate emerge is enough to jangle the nerves. Inflation chips away at the real value of savings and investments, meaning you need higher returns for your money to keep the same purchasing power.

Here’s what you can do to shield your portfolio from the risk:

You might think gold is your first stop as a hedge against inflation, but it’s not quite so straightforward.

While the precious metal has a track record of keeping its value over the very long term — researchers once estimated that an ounce of gold would have bought the same number of loaves in Babylon over 2,500 years ago as in modern times — in the shorter term it fluctuates like any traded asset. At the moment, gold is down about 10% from last year’s all-time high.

While advisors say gold can be a sensible part of a balanced portfolio in small proportions, they caution against going in too hard. Unlike equities, you don’t earn returns from holding it. And if you buy the physical metal, there are holding costs to consider.

“Even historically, gold and inflation have been uncorrelated for very long periods, for example from 1983 through 1990,” said Guy LeBas, chief fixed income strategist at wealth manger Janney Montgomery Scott. “In the longer term, there is likely some inflation hedge aspect to gold, but there are better inflation hedges elsewhere in the financial system.”

He suggests looking instead at industrial metals, energy commodities and dividend-growth equities.

The standard personal-finance rule of thumb is to have three to six months of expenses immediately accessible in cash as an emergency fund. Once you have that (or a higher figure if you believe your position is more vulnerable than average), experts advise looking at alternatives, particularly with interest rates at rock-bottom levels.

“We see a major risk for bank deposits, especially in Asian economies where a large segment of the population has a strong savings mindset and would rather have a large proportion of wealth sitting idle instead of placing it in investment portfolios,” said Dhruv Arora, founder of Singaporean digital wealth manager Syfe. “In today’s environment, investing is a necessity to help retail investors hedge against rising inflation.”

If you are are holding cash because you plan on making a big purchase in the next few years and need certainty, advisers recommend looking for ways to make that money work for you. For example, banks in countries such as the U.K. and Australia offer mortgage offset accounts, where the balance in an account linked to your mortgage is netted off against your loan total, saving you interest.

Term deposit accounts, which require you not to withdraw your money for a set period, also offer slightly higher rates than those that give you instant access.

Normally, conventional economic theory holds that inflation occurs when growth is increasing (the stagflation situation of the 1970s when high inflation paired with a recession was an exception). So it would make sense to increase exposure to investments that would benefit during a period of economic expansion.

“There is a tailwind for assets exposed to economic activity,” Leon Goldfeld, portfolio manager with JPMorgan Asset Management multi-asset solutions team said. “You want to have exposure to growth. You want to have diversification as a way of managing risk.”

So companies that can either earn more money in times of growth or have the capacity to raise their prices ahead of cost increases are considered inflation hedges.

Another popular option for those seeking protection from rising prices are inflation-linked bonds. These are primarily issued by governments in an effort to keep sovereign borrowing costs low.

Their outstanding principal and interest rates are adjusted in line with inflation. This means they gain value when inflation is rising.

But if inflation stays low, you can lose ground by holding them if regular bond yields increase. They’ve also become more expensive as expectations for increasing inflation have solidified.

As such, their main attraction is for investors who think  the risks of inflation are higher than the market is currently pricing in.

Kellie Wood, fixed income fund manager at Schroders Plc in Sydney, says she’s been increasing her portfolio’s exposure to inflation-linked bonds while reducing holdings of nominal bonds partly because she believes that central banks will be willing to tolerate far more inflation that they would have historically. “They’ll need to see the white of its eyes before they tighten,” she said.

Investors looking for an inflation hedge by way of physical assets — one traditional buffer against increasing prices — might take a cue from the upper crust.

“Aristocrats in Europe have long known that you buy land and watch your wealth go up,” said real-estate specialist Chris Bedingfield, portfolio manager at Quay Global Investors. “It holds value.”

Bedingfield is not one of those predicting inflation’s imminent return. But for those who do want to get into property, he suggests focusing on locations, whether residential or commercial, close to urban nodes or popular suburbs. He cautions, though, that investors should beware of the hype surrounding certain sectors. “The e-commerce boom is real, but a lot of people are overpaying,” he said.

Advocates of Bitcoin tout its potential as an inflation hedge due to its inbuilt scarcity — supply is capped at 21 million coins. Yet skeptics argue something also needs inbuilt value and desirability, not just a limited supply, to be a genuine inflation hedge.

It’s a debate that’s set to continue but the advice from financial professionals is clear: Proceed with extreme caution. The U.K.’s financial watchdog warned consumers investing in cryptocurrencies should be prepared to lose all their money.

“It’s building a diverse portfolio that’s the key,” Alex Shields, an advisor at London-based independent financial planning firm The Private Office said. “I certainly wouldn’t be investing in a single area just to get the inflation protection. ”