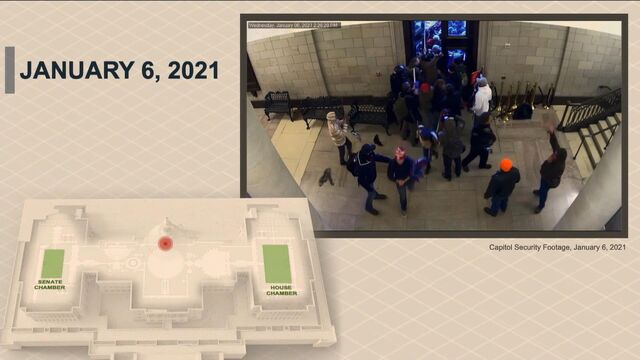 WATCH: During Trump’s Senate trial, Rep. Eric Swalwell played video of rioters getting into an area directly under the Capitol rotunda.

Law enforcement officials responsible for U.S. Capitol security during the Jan. 6 attack blamed their inadequate defense on incomplete intelligence, and they offered differing accounts of why it took so long to call in National Guard reinforcements to repel the rioters.

The officials, three of whom resigned after the riot, spoke at a joint Senate hearing Tuesday that failed to shed light on the intelligence failures beforehand and delays in the Defense Department response. Senators plan to call witnesses next week from several federal agencies, including the Pentagon as the panels continue to seek accountability and improved security at the U.S. Capitol.

“A clear lack of accurate and complete intelligence across several federal agencies contributed to this event, and not poor planning by United States Capitol Police,” Sund said. “These criminals came prepared for war.”

Contee testified that as conditions deteriorated around the building, he was “stunned at the response” of the Department of the Army, “which was reluctant to send the D.C. National Guard to the Capitol.”

The joint hearing of the Senate Homeland Security and Rules and Administration committees was the first in a series of lawmaker inquiries into the origins of the insurrection and the failure of Capitol security forces to anticipate and then quell the riot that left five people dead.

“While we made progress today, this is not the end of our quest for answers,” Rules Chair Amy Klobuchar said after the hearing. “Next week, we will hear from witnesses from federal agencies — including the FBI, the Department of Homeland Security, and the Department of Defense — that are critical to our understanding of what happened this day and what changes need to be made to ensure it never occurs again.”

During Tuesday’s hearing, Sund and Irving contradicted each other’s recollection of a request for National Guard reinforcements Sund said was denied two days before the riot. There also were disagreements on key details of planning for and responses to the attacks, such as Sund suggesting that the “chain of command,“ including congressional leaders, delayed the approval of National Guard backup the afternoon of the riot.

Rather than blaming Trump for inflaming his supporters with a fiery speech before the attack, some Republicans have focused on the role House Speaker Nancy Pelosi played in security preparations.

In response to questions from Republicans, including Senators Josh Hawley of Missouri and Ted Cruz of Texas, Irving said he didn’t wait for Pelosi or Senate Majority Leader Mitch McConnell to approve a request for reinforcements.

All of Tuesday’s witnesses said they were caught off guard by the coordinated violence from insurrectionists chanting support for Trump and threats of violence against members of Congress. They said they didn’t have the forces to deal with such an unprecedented event.

“These resources were barely enough to counter an event that had never happened in the history of the United States: a mob of thousands of American citizens launching a violent assault on the U.S. Capitol – the seat of our government – in an attempt to halt the counting of the electoral ballots, an essential step in the peaceful transfer of power in our nation,“ Contee said.

Investigating Capitol security flaws was crucial for the lawmakers hearing Tuesday’s testimony, since they themselves were targets of the mob that sought to disrupt a joint session of Congress meeting to certify November’s presidential election.

“This is hearing is unique because it’s personal to everyone involved,” Senator Gary Peters of Michigan, the chair of the Homeland Security panel, said in his opening statement.”

The assault was replayed in vivid detail at Trump’s Senate trial after he was impeached on a charge that he incited the mob. The Senate voted Feb. 13 to acquit the former president, but the bitter partisanship of the moment hasn’t dissipated, even as members of both parties are calling for a thorough examination of the attack.

Two House hearings related to the riot also are scheduled this week, and retired Army Lieutenant General Russel Honoré is conducting an independent security review Pelosi requested. Pelosi also is proposing an independent commission, modeled on the panel that investigated the Sept. 11, 2001 terrorist attacks, to review the causes and security failures of the Capitol assault.

One of the main disagreements among the witnesses at Tuesday’s hearing was when Sund asked Irving to call in help from the National Guard. Sund said he “notified the two Sergeant at Arms by 1:09 p.m. that I urgently needed support and asked them to declare a state of emergency and authorize the National Guard.” Sund said Irving responded that he “needed to run it up the chain of command,” including congressional leadership.

Irving had a different recollection.

“I have no memory of a call at 1:09 p.m. and I have reviewed my phone records: there is no call from Chief Sund (or any other person) at that time; the first call from Chief Sund in the one o’clock hour is at 1:28 p.m,” Irving said, characterizing Sund as saying he “might need to make a request for the National Guard.”

Irving also objected to reports that he was concerned about “optics” both in the preparations for Jan. 6 and in calling armed reinforcements as the attack was underway.

“’Optics’ as portrayed in the media did not determine our security posture; safety was always paramount when evaluating security for Jan. 6,” Irving said. “We did discuss whether the intelligence warranted having troops at the Capitol, and our collective judgment at that time was no—the intelligence did not warrant that.”

Contee said he was shocked by the response when the request for National Guard forces was finally sent to the Army secretary, who must approve National Guard deployments in Washington.

“While I certainly understand the importance of both planning and public perception,” he said, “these issues become secondary when you are watching your employees, vastly outnumbered by a mob, being physically assaulted,” he said.

He added that he was able to “quickly deploy” his Metropolitan Police Department officers “and issue directives to them while they were in the field, and I was honestly shocked that the National Guard could not – or would not – do the same.”

After the hearing, Gus Papathanasiou, the head of the Capitol Police union, said in a statement that “instead of cohesive leadership, we heard Stenger, Irving and former Chief Sund give contradicting accounts about the department’s handling of requests for backup from the National Guard. It’s maddening.

“Even after this hearing, we still don’t know why rank-and-file officers were not fully briefed on the threats that our leadership already knew were looming,” Papathanasiou added.

Pelosi wants to establish an independent commission to investigate the insurrection. Republicans have objected to a Democratic proposal for 11-seat panel that would give seven seats to Democratic appointees -- including three to be named by President Joe Biden -- and four to Republicans. GOP leaders want the panel to be evenly divided.