Where to Invest Your $1,400 Stimulus Check

If your essentials are already covered, here are some ideas of how to put that money to work. 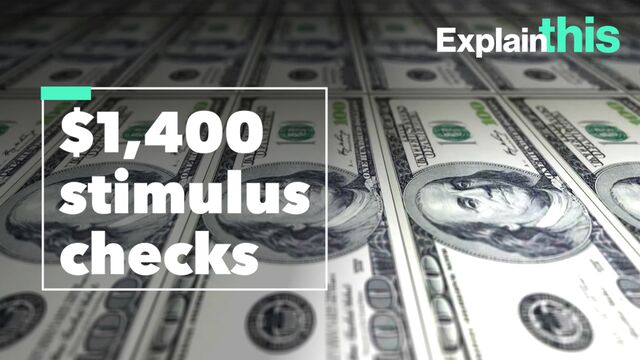 The third round of U.S. stimulus payments is well on its way out the door, just days after President Joe Biden signed his $1.9 trillion stimulus bill into law. For some, the question now is what to do with the money.

The $1,400 checks are coming at a complex time for many Americans. Millions are still unemployed and in desperate need of the cash, which comes in addition to unemployment support. But the economy is recovering, and 21% of the population has received at least one vaccine shot. Some are back at work or planning a return to the office soon.

Does an economy on the mend mean it’s safe to spend or make bets on the market? Should some be put in savings, and if so, how much? What about charitable giving? Or should it be put back into the local economy, spent at neighborhood stores?

Advisers say it doesn’t have to be an either-or situation. “You save some, you give some and you spend the rest,” said Scott Cole, president of Cole Financial Planning and Wealth Management in Birmingham, Alabama. “You could say, ‘I would like to pay down some debt, stick a little in my cash reserve and still have a little bit to do some fractional trading,’ if you want to.”

More than a third of Americans indicated they would save a significant amount if they were to receive a stimulus check, according to a survey by Morning Consult commissioned by Bloomberg News. Meanwhile, about half of people who already invest between the ages of 25 and 34 plan to put 50% of their stimulus funds into the market, according to a survey by Deutsche Bank that polled more than 400 investors with brokerage accounts.

Most advisers wanted to be very clear. The first thing you should ask yourself: Can you afford to lose the money? Do you have enough in an emergency fund? What level of risk are you willing to take — and should you take?

Here is what they told us:

If you’re willing to take some risk:

Advisers have a range of ideas for those who want to buy shares in companies, either directly or via sector ETFs.

People who want the potential upside of a bigger payoff could speculate on a more targeted ETF, said Dave Alison of Palo Alto-based Alison Wealth Management. “If you are bullish on clean energy based on President Biden’s plans, an ETF like the Invesco Solar ETF (TAN) or the iShares Global Clean Energy ETF (ICLN) could be a way to enhance return if your speculation comes to fruition,” he said.

For people interested in tech stocks who are able to handle some volatility, look at tech-concentrated ETFs such as Vanguard Information Technology (VGT) — which holds more than 35% of assets in just two stocks, Apple Inc. and Microsoft Corp. — or the iShares Expanded Tech Sector ETF (IGM), Alison said.

Many companies in areas like industrials and financials are considered value stocks now, or those priced low relative to the value of their assets. “Once these segments of the market start to move, they become momentum stocks, and they become the replacement for growth stocks,” said Robert Cheney of Palo Alto-based Westridge Wealth Strategies. In particular, Cheney would focus on small-cap value stocks in the U.S., and thinks the iShares Russell 2000 ETF (IWM) is a good investment idea today.

Kevin Hegarty, principal at Hegarty Advisors in Garden City, New York, also likes small-cap value stocks, which he said will track the U.S. economy as it improves better than the larger S&P 500 companies.

Matthew Benson, of Chandler, Arizona-based Sonmore Financial, uses the $193.3 billion American Funds EuroPacific Growth Fund (AEPGX) to give clients exposure to international markets. As of Dec. 31, just over 40% of the revenues in the fund’s holdings came from Europe, followed by emerging markets (31.9%).

Hegarty recommends looking at another country that has been a leader in vaccinations, the U.K. “They’re also coming off their worst year in 300 years,” he said. “People want to get out, they want to get to that pub."

If you need to pay off your credit card debt or have a lot of student loans:

Ryan Frailich, founder of Deliberate Finances in New Orleans, says do something that will make a meaningful impact on your monthly budget. “If there is a way to pay something off, it’s a really good idea — with a slight caveat around student loans,” he said. For example, some might want to wait to see whether Biden moves to cancel $10,000 in student loans.

“Let’s say you have exactly $9,800 in student loan debt and you drop $3,000 of your stimulus into your student loan, and three months from now they give a blanket forgiveness, then you literally just burned $3,000,” he said. “There’s no rush in paying it off now.”

If you want to invest in meme stocks or crypto:

Bitcoin and other cryptocurrencies are no longer seen as completely off limits by financial planners, who often tend to be conservative with their advice. Still, many say to only use a small percentage of the money you can afford to lose.

“Crypto is clearly a part of our modern economy going forward. That doesn’t mean that it should be a major part of your investment portfolio,” said Tony Molina, senior product specialist and CPA at Wealthfront Corp. “If you want to do 5/10% of your portfolio in crypto because you feel you should be part of that asset class, I get it.”

He has similar thoughts about stocks like GameStop Corp. or others that soared and crashed repeatedly this year.

“What we saw was a very rare circumstance,” Molina said. “The majority of people who try to buy and sell individual stocks — especially when they try to day trade — the majority of those people long-term don’t come out ahead.”

If you’re wondering whether to invest in these areas, maybe you’re asking the wrong questions, Frailich said.

“People talk about, ‘Should I invest in Bitcoin, should I invest in Tesla,’ and that’s the wrong way to construct the framework around investment decision making,” he said. “I understand a lot of people want to reach for those things because they’re exciting and in the news.”

But, he continued: “Consistently investing whatever happens to be in the headlines for a two or three month period is a terrible investment strategy.”

If you’ll need the money in a year:

It’s important to consider your time horizon when investing, said Chris Struckhoff of Lionheart Capital Management, based in Irvine, California. Do you want to buy a new car in five years or have enough to retire in 25? The closer you are to the goal, the less risk you should take. The idea is to guard against the market tanking right when you need money.

For safer picks for his clients, Struckhoff said he has added small allocations to preferred and convertible bond ETFs to bring in more yield with Treasury yields so low.

Hegarty said it’s a challenging time for conservative investors. “Where do you hide if you don’t want equity volatility in your portfolio?” he said. He likes muni bonds, because the stimulus will help state and local governments. He also suggests utilities and telecom stocks, which he describes as bond proxies.

Or try commodities. “They have under-performed for a long period of time, but this year they're off to a good start as many are concerned about inflation,” Hegarty said.

If you’re worried you might not be able to pay your bills in two months:

You need an emergency fund, advisers say. “It sounds super boring, because it is,” Struckhoff said. “That may help you get back to work faster or stay engaged at work knowing there is that cushion.” Generally, he recommends saving three months of expenses, if you have two sources of unrelated income, or six months of expenses if you have one job or source of income.

Don’t forget to think about health insurance deductibles when calculating potential expenses. In addition, if you have any debt in forbearance or on limited interest-free plans — like credit cards, student loans or mortgages — remember to add those in.

“If you don’t get these little windfalls too often, if this is what encourages you to start a cash reserve that would be a first place I would look at,” Cole said. “It’s probably the least exciting, sexy approach to using a stimulus, but it’s probably the most prudent because hopefully we don’t have another pandemic in our lifetime but we will have something.”

If you’re worried about keeping the money to yourself:

The pandemic has reminded people that they can’t live on the financial edge all the time, Cole said. “Congress is wanting you to stimulate the economy, but your responsibility is to look after your own welfare,” he said.

There’s another way to look at economic stimulus, Molina said. “If you aren’t in that category that fell behind and this is a luxury for you, setting that money aside and using it to simulate the economy in other ways — not just now but down the road, that could have just as much of a positive impact,” he said. “Buying that home in a year is also going to stimulate the economy.”

Frailich says he doesn’t think anyone has a moral obligation to spend the money in any particular way — or at all. “Every tax cut or similar thing that happened for relatively wealthy people in the past has not come with a moral obligation to spend the money back into the economy,” he said. “We would be asking a population who have never had that happen when others get it, to take action that is potentially not in their best interest. It would be a very unfair expectation to hold them to when we’ve never held others to it.”

If you don’t want to think about it too much:

For someone with about $1,000 to invest, Kristi Sullivan of Sullivan Financial Planning in Denver, is a fan of all-in-one mutual funds that do the work of diversifying and rebalancing between asset classes. These could be target-date funds, which are designed to become more conservative as time goes on, or asset allocation funds, she said. You can decide whether you want your money to be invested in a mix of stocks and bonds that is pegged to your stomach for risk, whether you fall into the conservative, moderate or aggressive camp.

Similarly, Timothy Sobolewski of The Financial Planning Center in Amherst, New York, would steer a client with a moderate risk tolerance to invest into a no-load asset allocation fund that has between 50% and 70% in equities, from companies like Fidelity, Vanguard and T. Rowe Price, and to funds that are 75% to 80% invested in stocks for more aggressive investors.

— With assistance by Laura Davison