Giuliani Raid Pushed by Prosecutors Who Chose the ‘Hard Way’

Giuliani Raid Pushed by Prosecutors Who Chose the ‘Hard Way’ 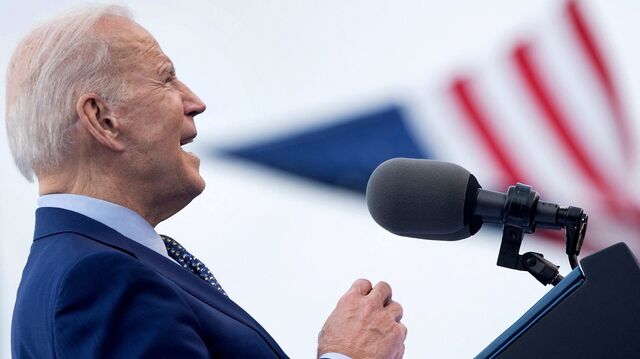 The fate of President Joe Biden’s $4 trillion economic vision for the U.S. now rests with the lawmakers turning his infrastructure and social-spending plans into legislation that can get through a narrowly divided Congress.

Congress approved his $1.9 trillion coronavirus-relief plan in March, largely intact and less than two months after it was proposed. This time Biden has put forth the $2.3 trillion American Jobs Plan focused on infrastructure, manufacturing and corporate tax increases, and the $1.8 trillion American Families Plan composed mainly of social spending and tax hikes on wealthy individuals.

Passing the spending and tax increases envisioned by Biden will depend on where lawmakers can find compromise. But without the urgency of the pandemic -- and with Democrats less united on the overall size of the proposals than they were in approving the aid package -- the plans could be debated by Congress well into the fall or even 2022.

Here’s what to watch for as Congress starts to debate legislative language based on the White House proposals.

The number, size and scope of bills passed by Congress will depend on bipartisan agreement on at least one part -- likely physical infrastructure -- and whether Democrats can hold together on other elements.

The White House is more willing to try a bipartisan agreement with Republicans at least on the infrastructure portion. House Speaker Nancy Pelosi and Senate Majority Leader Chuck Schumer have yet to lay out out a legislative strategy, beyond backing moderate Democrats’ calls for bipartisan cooperation and endorsing a goal among progressives of tackling prescription drug prices.

If Democrats and Republicans manage to approve a bipartisan bill, the focus will then turn to whether Congress can pass one or more Democratic-only social spending and tax bills. It’s also possible Congress could just pass smaller bipartisan bills, like a China-focused manufacturing plan.

If bipartisan talks fall apart, the focus would turn to whether Democrats can pass one or more bills by themselves. A Democrat-only bill could also potentially follow a bipartisan compromise on infrastructure. And of course, Congress could also succumb to gridlock on subsequent bills, or on the entire Biden package.

The focus is now on talks between the White House and moderate GOP senators led by West Virginia’s Shelley Moore Capito on a path forward for an infrastructure bill. Capito has laid out a $568 billion counteroffer, centered on more traditional items like road and bridge construction. Some of that incorporates maintenance funds already expected to be spent over time.

Read More: How the GOP Plan Compares With Biden on Infrastructure

The Senate is on recess this week, returning May 10. Two days later, Biden will meet at the White House with Senate Minority Leader Mitch McConnell and other top congressional leaders. A lack of progress in the talks with Republicans by this gathering could be a sign of trouble.

Both the Senate Environment and Public Works Committee and House Transportation and Infrastructure Committee are aiming to hold votes on surface transportation bills by the end of May. Signs of agreement, especially on climate-related spending such as on electric vehicle charging stations, would bode well for a bipartisan bill passing in the summer.

More broadly, key players to watch include moderate Democrats such as West Virginia’s Joe Manchin, Arizona’s Kyrsten Sinema and Virginia’s Mark Warner. Others include Tom Carper and Chris Coons of Delaware and Jeanne Shaheen and Maggie Hassan of New Hampshire as well as independent Angus King of Maine.

These members place a high value on bipartisanship, and have signaled they may be uncomfortable moving to a Democratic-only bill without a concrete effort at compromise. At the same time, if bipartisan talks fail, Democrats could pass also one or more bills on their own.

At some point, Democrats will confront the question of whether to pass some of Biden’s proposals on their own, without Republicans, who firmly oppose items including the rolling back some of President Donald Trump’s signature tax cuts and large-scale expansion of social spending.

They would need to do that using budget reconciliation, the special fast-track process they used to ram through the Covid-19 bill. But reconciliation bills have special rules, including some that likely leave out some of the infrastructure elements.

How much flexibility the Democrats have could depend on a ruling expected in the coming days or weeks from the Senate parliamentarian, who makes judgments on the matter.

Democrats would still need to reach agreement among each other on what to proceed with. Progressives have said they view Biden’s $4 trillion as too small and want to add more health-care provisions. Moderate Democrats like Manchin have indicated discomfort with the size of the spending as well as some of the tax increases.

A key factor: whether Biden’s proposals keep polling well, in effect putting pressure on the party to support them. The White House plans to keep selling the plans with public outreach. Also worth watching is the state of the economic rebound, and whether voters start tilting toward the GOP argument that a strong recovery means less spending is warranted.

Biden’s proposals to increase the corporate tax rate to 28% from 21% hit quick turbulence in his own party. Manchin and others indicated they could be comfortable with a lower, 25% rate. A proposal to increase capital gains taxes is also facing skepticism and could be pared back in legislation.

“Right-sizing that is going to take a delicate balance and a lot of wisdom,” Representative Don Beyer, a Virginia Democrat, said Monday on Bloomberg Television.

Key decisions on the scope of tax increases will be made by Senate Finance Committee Chairman Ron Wyden and House Ways and Means Chairman Richard Neal. Both committees are expected to act on taxes once the scope of the spending is decided. Wyden has put forward his own ideas on both corporate and individual tax increases.

Another wild card: demands to lift the $10,000 cap on the state and local tax (SALT) deductions. Nearly two dozen House Democrats and Republicans have formed a SALT Caucus, vowing to hold any tax-code bill hostage to secure a lifting of the ceiling imposed by the GOP tax-cut bill of 2017. A compromise here could involve enlarging the cap rather than abolishing it.

“We expect Congress to raise the cap to something like $50,000, or reinstate it for taxpayers under a certain income threshold, which could be done at a fraction of the cost,” Goldman Sachs Group Inc. wrote in a recent research note to clients.

One potentially complicating factor lurking in the backdrop of Congress’s agenda is the need to raise the nation’s debt ceiling, which comes back into effect in August after a two-year suspension. While the Treasury has options to keep servicing U.S. debt for a time, legislative action will be vital.

Democrats are widely expected to use a budget-reconciliation measure to raise the ceiling to defuse any Republican move to use it as leverage for spending cuts -- as they did in 2011. But, it isn’t yet clear if all 50 members of the Senate Democratic caucus and the slim Democratic House majority are on board with increasing the limit.

— With assistance by Daniel Flatley

(Adds detail on GOP spending plan in paragraph after ‘Talks on Infrastructure’ subheadline.)
Have a confidential tip for our reporters?
GET IN TOUCH
Before it's here, it's on the Bloomberg Terminal.
LEARN MORE