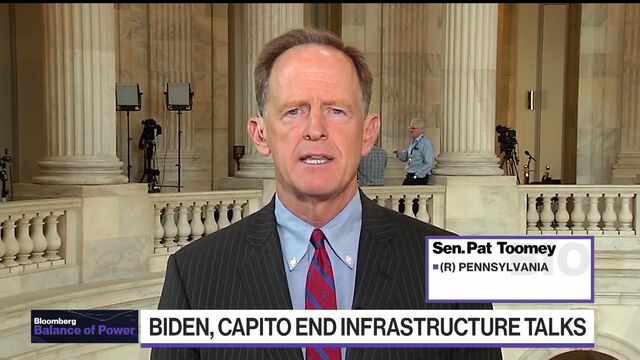 A bipartisan group of 10 senators has agreed to pitch a $1.2 trillion eight-year infrastructure spending package to President Joe Biden, according to people familiar with the deliberations.

The proposal, backed by Republicans including Mitt Romney and Democrats including Joe Manchin, calls for $579 billion in net new spending beyond outlays that Congress was already expected to enact, according to the people.

That is still well below the $1.7 trillion Biden had proposed in his direct talks with a Republican group of senators led by Shelley Moore Capito of West Virginia. The Biden-Capito negotiations ended in failure earlier this week. The White House has instead turned its focus to the potential with the bipartisan group of senators.

The proposal is limited to core physical infrastructure and omits the social programs such as elderly care Biden included in his “American Jobs Plan,” the people said. They also said there are no tax increases included, although Romney earlier said the group was discussing indexing the gasoline tax to a measure of inflation -- something he doesn’t count as a tax hike.

“We are discussing our approach with our respective colleagues, and the White House, and remain optimistic that this can lay the groundwork to garner broad support from both parties and meet America’s infrastructure needs,” the group of 10 senators said in a joint statement Thursday.

The group includes Republicans Romney of Utah, Bill Cassidy of Louisiana, Rob Portman of Ohio, Susan Collins of Maine and Lisa Murkowski of Alaska, along with Democrats Manchin, Kyrsten Sinema of Arizona, Jon Tester of Montana, Jeanne Shaheen of New Hampshire and Mark Warner of Virginia.

The group’s package totals $974 billion when applying the five-year scoring that’s typically used for highway bills, according to the people.

The group “reached a bipartisan agreement on a realistic, compromise framework to modernize our nation’s infrastructure and energy technologies,” it said in its statement.

Republican and Democratic senators said earlier on Thursday that, as part of the funding for the bill, they were open to considering the first change in the national gasoline tax since 1993.

But the White House has made it clear to lawmakers that such a measure, as well as any discussion about an electric vehicle mileage tax, would violate Biden’s red line of not raising taxes on Americans who earn under $400,000 a year, and cannot be part of any package, according to a person familiar with the matter.

Dick Durbin, the No. 2 Senate Democrat, said Thursday he’s in favor of indexing the gas tax. And Tester said, “I’ll take a look at it.”

White House officials met on Thursday with Democratic senators working on a bipartisan agreement. “Some questions still need to be addressed, particularly around details of both policy and pay-fors,” White House spokesman Andrew Bates said.

Cabinet members and senior White House staff will “work with the Senate group to answer those questions as we consult with other Members in both the House and the Senate,” Bates said.

— With assistance by Justin Sink, and Laura Litvan

(Updates with details and context on funding measures, starting in fourth paragraph.)
Have a confidential tip for our reporters?
GET IN TOUCH
Before it's here, it's on the Bloomberg Terminal.
LEARN MORE