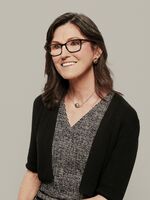 Her flagship fund ARKK, which had a dramatic breakout during the pandemic, is way off its peak as bold bets on Tesla and Bitcoin have faltered. But for the superstar portfolio manager, there’s always five years from now.

In the weirdest year of our lives, the rise of Cathie Wood is hardly the weirdest thing to happen. But still. She’s the first star in an industry, the $6.3 trillion world of exchange-traded funds, that wasn’t supposed to have any. She’s a throwback—a money manager who’s actually famous among regular investors, like Peter Lynch or Warren Buffett. And not only is she the first woman to play that role, she’s taken a throne in the pantheon of meme stock demigods, up there with the Elon Musks and shiba inus.

Wood moves stocks with her trades and her tweets. On social media and in online forums around the world, her name is synonymous with a certain brand of technophilia, an enthusiasm for the next big thing, whether that’s robotics or gene editing or digital currencies. Some of her bolder predictions for Bitcoin and Tesla came true, to the shock of Wall Street analysts who found them ridiculous.